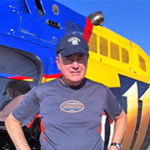 Reed Yadon was living a busy life in Kentucky as a television meteorologist and helicopter pilot when he says his world suddenly changed. After a routine annual physical revealed his prostate-specific antigen (PSA) level had increased, a urologist confirmed one of his worst fears: he had prostate cancer.

“Everything stood still,” he says. “It was a cold, dreary February morning. I walked back to my car after that appointment, numb, and I just went to pieces.”

But then he sprang into action. Luckily, Reed’s cancer was Stage 1, so he had many options for treatment. He spent the next four days researching treatment options online, including focused ultrasound, which was first mentioned to him by his family physician. His urologist, Dr. John Jurige, confirmed that Reed was a candidate for high intensity focused ultrasound (HIFU) given his early diagnosis, overall health, and the fact that his prostate happened to be smaller than average.

“Everything I read about focused ultrasound or HIFU made sense to me,” explains Reed, who was in his 50s when he was diagnosed. “As a scientist, it just made sense. The more I read, the more I liked about it. I couldn’t find anything bad about the procedure. It almost sounded too good to be true… but it turns out it wasn’t.”

After discussing HIFU with Dr. Jurige, Reed was quickly convinced. “My two main questions to him were, ‘Am I going to be wearing diapers for the rest of my life?’ and ‘Is sex over?’ I think most men worry about this. They think prostate cancer means nothing is going to work anymore. When Dr. Jurige said, ‘Absolutely not’ to both questions, I had the first hint that the sun was going to shine again. My next question was, ‘How soon can we do this?’”

Because SonaCare’s HIFU system was not yet approved in the United States in 2013 when Reed was diagnosed, he travelled to Cancun, Mexico the next month for his procedure. The cost at the time was $25,000 plus travel expenses.

“I can’t say enough about SonaCare’s International HIFU team as well as Dr. Jurige [who met Reed in Cancun to perform his procedure] and his practice, how they all assisted me every step of the way, told me what to expect, answered my questions,” Reed added. “They were my support system, and I felt very educated. It really was so seamless. We arrived on a Thursday, I had the procedure on Friday, and we flew home on Saturday. I didn’t miss a single day of work.”

Reed’s outpatient HIFU procedure took about three hours. “I walked myself into the operating room, and the next thing I know, I wake up and the cancer is gone.” He says he had chills for about half an hour after treatment (due to the heat generated in the body during the thermal ablation process) but otherwise felt “pretty normal.” He required no pain medicine, and just had very mild muscular pain in his abdomen at first, as if he’d done too many sit-ups. He checked out of the hospital within a couple of hours after his surgery, wearing a urine bag, and then with Dr. Jurige’s blessing went on a two-mile walk with his girlfriend! That evening they even went out to dinner and had “one of the best Italian meals” together.

Reed says his recovery back in the US was “no big deal.” He wore a catheter (inserted straight into his bladder through small incision in his abdomen) and urine bag for about a week. “Everyone’s worried about the urine bag. But I went on 3 to 4 mile walks with it, no problem. And I was nervous to start trying to urinate on my own again, but it was fine. I was jogging again in two weeks and was able to have intercourse again in three weeks. Everything I might’ve been worried about didn’t happen,” he says. He adds that his urine function and sex life continue to be completely normal and he now sees Dr. Jurige only annually to monitor his PSA levels, which remain undetectable.

Reed now describes HIFU as “a cutting edge, non-invasive, relatively simple procedure — and if you’re a good candidate, it’s the way to go. HIFU is going to be to prostate cancer what the Salk vaccine was to polio, I really believe that.” He adds that there are no true downsides to HIFU that he is aware of except perhaps needing re-treatment (having to undergo the procedure again at another time), which is rare.

“I also really want men to know that early diagnosis is the key to being good candidate for this procedure – and to surviving prostate cancer,” he adds. “So guys, know your PSA levels. Prostate issues make men squirm. Get over it; it can save your life. I hope that someone reads this story who is where I was on that cold February morning and realizes that there’s a lot of reason to be very hopeful, and your chances of having a great outcome are likely very high.”

Dr. John Jurige in Louisville, Kentucky is one of the leading HIFU physicians in the United States. He can be reached at Allied Urology at 502-584-0651.