Mario Ries, Ph.D., a physicist at the Laboratory for Functional and Molecular Imaging in Bordeaux, 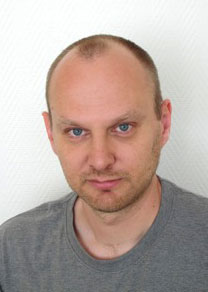 France, has been intrigued with the notion of combining noninvasive ablation with MR guidance since 1997. Today, his key ambition is help the roughly one to one and a half million people globally diagnosed with breast cancer every year.

Ries has received a $100,000 research award from the Focused Ultrasound Surgery Foundation to pursue a project he believes will result in a safer and more effective treatment for breast cancer. His objective is to solve the technical drawbacks that cause existing high intensity focused ultrasound (HIFU) transducers – devices that convert energy into sound waves and focus the waves on a target – to damage tissue around the breast, including to the thoracic cage, heart and lungs.

“Currently, there is no dedicated transducer type for breast cancer,” Ries says. “We can only use transducer designs dedicated for other types of cancer treatment, which is suboptimal. This complicates FDA approval. Finally, people understand that this has technical drawbacks because it might impair patient security. What we propose is a complex technical innovation on a transducer, which is the antenna system on acoustic emitter, which is dedicated for breast treatment.”

According to Ries, the breast structure poses special challenges for HIFU treatment because there are many different types of tissue (such as fatty and granular) that conduct sound waves differently. This ‘inhomogeneous propagation media’ means that an ultrasound beam can become unfocused and has to be corrected. And because every breast is different, every correction needs to be different as well. Ries plans a correction strategy for aberrations in breast ultrasound, based on high resolution MRI along with tissue ultrasound speed measurements.

“HIFU treatments have the potential to both reduce the cost of breast cancer treatments and reduce the side effects,” Ries observes. “The basic edge of HIFU is you could do such an intervention in one afternoon. You could treat a breast and cauterize the primary tumor without having to hospitalize the  patient. And using HIFU along with chemotherapy, you could potentially skip radiation treatment altogether.”

Ries estimates he is about one year away from knowing whether his proposed solution has scientific merit. If it does, he estimates it will take about two years to begin clinical trials.

Regarding his research award, Ries says, “I’m really happy to receive this recognition. The FUS Foundation has a reasonable application scheme and a fast turnaround time. It’s a project we can conclude within a year and it’s absolutely doable. It is refreshing you can actually get your hands on funding and get something going. It’s very positive.”