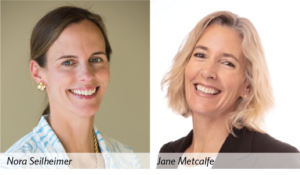 Nora Seilheimer and Jane Metcalfe have been named as the new co-chairs of the Foundation’s Council, a dedicated group of goodwill ambassadors who work closely with the Board of Directors and staff to provide advice and assist with raising funds and building awareness.

The change in leadership comes as longstanding co-chairs Jane Batten and Charles Seilheimer, Jr., step down from their roles – but they will continue as active members of the group.

Ms. Seilheimer’s initial involvement with the Foundation was in a volunteer capacity before she later joined the staff as Chief Advancement Officer in 2015. During her tenure, the Foundation had great fundraising success, with annual commitments ranging from $6 to $26.4 million. She recently accepted a new position as Director of Advancement at the Piedmont Environmental Council.

Ms. Metcalfe is founder and CEO of NEO.LIFE, a media and events company “tracking the radical changes taking place in humans as we harness the tools of engineering and computer science to alter our own biology.” She became interested in focused ultrasound after meeting the Foundation’s Chairman Neal F. Kassell, MD, and featured his work and the technology in a 2020 article. Shortly thereafter, she joined the Council.

“I am intrigued by the multiple biological effects of focused ultrasound and excited by the Foundation’s progress in building the case for its effectiveness in so many life changing applications,” said Ms. Metcalfe. “It’s an honor to be involved with such a dynamic organization.”

“Nora and Jane are dynamic advocates for focused ultrasound, and I am thrilled they have agreed to lead the Council,” said Dr. Kassell. “Nora has been a passionate ambassador for the organization and the technology for nine years and will continue to be one as she joins the Council. Lastly, I want to extend my deepest appreciation and gratitude to our outgoing co-chairs, Jane and Charlie, who have dedicated so much of their time and resources to our cause.”