Sherry Sharp founded the Rick Sharp Alzheimer’s Foundation in memory of her husband and to bring a greater awareness to the need for research funding. Sharp serves on the board of directors of the Cure Alzheimer’s Fund and as an advisor to Sweet Monday Ministry. 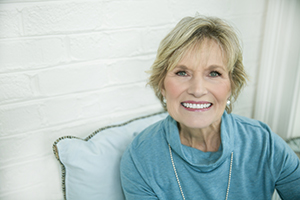 Can you give us some brief biographical information?
I live in Richmond, Virginia, where I have happily been a mother of two daughters, grandmother to four grandchildren, and a wife to my high school sweetheart, Rick Sharp. Rick and I were married for 46 years before he passed in 2014 from Alzheimer’s disease. Throughout our married life, I was extremely satisfied to support him as he worked to make Richmond a better place through his business ventures, community work, and philanthropy. Our lives took a sudden turn when Rick was diagnosed with earlier onset Alzheimer’s at age 63, and our roles were abruptly reversed.

My faith is what grounds me and has helped me considerably in life, especially during Rick’s illness and after his death. I love to write, and journaling has been a very therapeutic tool for me through this journey. My writings, which can be found on my website (http://sherrythewriter.com/) and on other Christian websites, seem to resonate with others, and I have developed a following. My second career as a writer keeps me busier than I have ever been, and I find great joy in helping others through my writing.
My family is very important to me, and I enjoy the time I spend with my children, grandchildren, and dogs.

What is your connection to the Foundation? How did you first hear about us?
Rick and I were introduced to the work of the Focused Ultrasound Foundation through friends. Our initial interest was cancer because both of our daughters are cancer survivors and had very invasive surgeries. The promise of a noninvasive approach certainly got our attention.

At the time of our introduction to the Foundation, Rick was just beginning to show signs of Alzheimer’s, although he had not yet been diagnosed. I remember asking Neal Kassell about focused ultrasound and if it would ever play a role in Alzheimer’s disease. He said no, and I remember feeling so disappointed. However, that narrative has changed, and now there are clinical trials using focused ultrasound for patients with Alzheimer’s. While it is still early and experimental, it excites me and gives me hope.

What excites you most about the Foundation?
I am very encouraged by the progression of focused ultrasound. The list of conditions that focused ultrasound can help continues to grow, and it gives me hope that this technology will help many people in the future.

What impact do you hope to achieve through your philanthropy?
The main focus of my philanthropy is funding medical research. I support organizations like the Focused Ultrasound Foundation and Johns Hopkins, and in 2014 I started the Rick Sharp Alzheimer’s Foundation to promote and fund research of Alzheimer’s disease. I serve on the board of the Cure Alzheimer’s Fund. Through these initiatives, I hope to improve many lives, including the lives of my children and grandchildren.

What do you tell others about focused ultrasound?
I tell others that focused ultrasound is an “out of the box” approach – an alternative that could be better than the 19th and 20th century medicine that we rely on today. Traditional medicine has not been effective, and we are in desperate need of novel approaches. Diseases like Alzheimer’s are devastating, to say the least, and we can’t neglect a single opportunity – focused ultrasound or any other.

What do you tell others about the Focused Ultrasound Foundation?
I tell them first about Neal because he sets the tone for the organization. He has more tenacity than anyone I’ve ever met. Neal could easily be retired, but instead he has devoted his life to advancing the field of focused ultrasound. He and the Foundation work tirelessly to promote focused ultrasound so that it can be used to help as many people as possible, in the shortest amount of time. I applaud him for the organization he has created and his dedication.