Eddie Smith, owner, chairman and CEO of Grady-White Boats, first learned about focused ultrasound when his wife was diagnosed with Parkinson’s disease. He has since become a supporter of the Foundation’s efforts in hopes of finding answers for his friends and family as well as countless patients around the world. 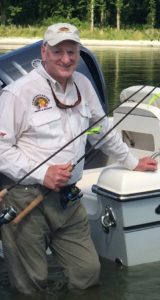 Grady-White Boats is the premier builder of outboard powered sport fishing boats, located in Greenville, NC. Smith has held his position in the company since 1968 when he purchased the business.

Smith graduated from the University of North Carolina in Chapel Hill in 1965 with a bachelor’s degree in Industrial Relations, and is a past member of its Board of Trustees.

His numerous industry and charitable affiliations include: past Chairman of the Board of Directors of the National Marine Manufacturers Association; past board member of the Sport Fishing and Boating Partnership Council; and past board member of the Congressional Sportsmen’s Foundation in Washington, D.C.  He is also a past Chairman of the National Association of Boat Manufacturers; past member of the Board of Trustees of the International Game Fish Association; and the Recreation Roundtable. He is a member of the World Presidents’ Organization and the Chief Executives Organization. Smith is past area Chairman of Ducks Unlimited of Pitt County; past member of the Pitt-Greenville Airport Authority; member of the Greenville Rotary Club; and a member of St. James United Methodist Church. He has been inducted into the NC Business Hall of Fame, was named the 1998 Carolinas Master Entrepreneur of the Year award, was the first recipient of the American Sport Fishing Association Lifetime Achievement Award, and is in the National Marine Manufacturer’s Hall of Fame.

Smith is married to the former Jo Allison Clary of Winston-Salem, has one son, Chris, and five grandchildren.

What is your connection to the Foundation?
Through my involvement with the UNC-Chapel Hill Educational Foundation, which raises scholarship money for UNC student-athletes, I know FUSF Council Members Tom and Nancy Chewning. When my wife, Jo, was first diagnosed with Parkinson’s, Tom suggested I meet Neal to learn about focused ultrasound and the role it will play in Parkinson’s disease. We flew up to Richmond and had lunch with Neal and were intrigued by what we heard.

What moved you to get involved?
Our lunch conversation with Neal was the tipping point – we were completely blown away. We knew Jo’s disease was progressing quickly, so the more educated we were about the possibilities, the better off we would be. While focused ultrasound wasn’t far enough along to help Jo, learning more about the technology and seeing the incredible potential was enough to motivate us to get involved.

What excites you most about focused ultrasound?
I believe we are looking at the tip of the iceberg in terms of the incredible potential that focused ultrasound has. Learning about the technology and the work of the Foundation excited me a lot. I have had 11 major surgeries, so any kind of technology that can provide a noninvasive alternative is going to be a game changer.

I have read that focused ultrasound is now being researched in over 100 clinical applications – I really believe that this is just a start. As the technology continues to be refined, and people understand it better, I think it will have an even greater impact on medicine.

I have several friends who have essential tremor and have encouraged them to look into focused ultrasound to see if it could help them. When I look at my friends, far and wide, it seems that many have a condition that could someday be helped by focused ultrasound. Additionally, I want focused ultrasound to help future generations, and supporting the Foundation is the best way I can help advance this incredible technology that has so much potential.

What impact do you hope to achieve through your philanthropy?
My dad came from humble beginnings – raised in an orphanage outside of Lexington, NC, his first jobs were as an usher at the local movie theater and driving a taxi cab. He went on to start his own company, National Wholesale, Inc., a mail order hosiery company. As soon as my father had money, he started giving it away. He was involved in building a new hospital, a library, a shelter for domestic violence victims, and led the conversion of an old movie theater into a civic center. My father’s generosity and civic-minded philanthropy made a great impression on me. I was taught from an early age the saying, “to whom much is given, much is expected.” We have been blessed, and I try to touch as many lives as possible. I hope to leave the world a little better than I found it.

What do you tell others about the Foundation?
I tell them that focused ultrasound is the future. It will be applied in so many areas and will improve so many lives. I believe it is the next great breakthrough.