A Patient Perspective: Cancer Immunotherapy and the Promise of Focused Ultrasound 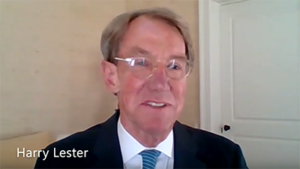 I was stunned. I never smoked, but I guess that’s not a prerequisite for lung cancer.

So, it was off to the races. A few years ago, I had a garden variety of cancer that was treated through a combination of surgery, chemotherapy, and radiation. I ended up in the hospital then, and I really was not up for that again. The same oncologist that I had last time suggested a new approach – immunotherapy.

I didn’t really know what that was, so I had to have a tutorial to find out what they were going to do to me.

For me, that meant a needle in the arm for about an hour or so every two weeks for an entire year. Then, voilà! No more cancer.

But, now, the not-so-good news: There are a variety of side effects that go along with immunotherapy. I endured a side effect for my year that was fairly unpleasant, but it was still better than the chemotherapy I’d had before.

Now, the really lousy news: Immunotherapy only works 20-40 percent of the time. When I started, only 20 percent of patients survived past one year.

I started off by saying that it’s been almost five years since I first noticed that cough. Remember that I said I was luckiest guy I know? It’s likely that now you understand why I never have a bad day.

When you experience life-threatening cancer and you don’t die, you eventually begin to think about the unknown researchers who started working on a new therapy decades before you needed it. And, when you reflect on that, you’re very thankful.

I am eternally grateful. They saved my life.

Focused ultrasound now has the potential for improving the effectiveness of immunotherapy, and for reducing the occurrence of side effects. Focused ultrasound is a disruptive technology, and fortunately it is one that’s developing at a rapid pace.

One final thought: I plan to smile as I pass my five-year mark. I’m very happy to be alive. And I have a very high level of confidence that in the future, focused ultrasound – in combination with immunotherapy – will make a lot more people lucky like me.

After graduating from Rollins College, Winter Park, Florida, Harry Lester served as an officer in the US Navy, and has lived in Virginia Beach since 1970. His career in commercial and industrial real estate was enhanced by community engagement including chairing the Hampton Roads Community Foundation, the Chrysler Museum and the Hampton Roads Business Roundtable and leading or serving on a variety of other boards and commissions. He served as President of the Eastern Virginia Medical School for eight years, retiring to community activities including Chair of the Lynnhaven River project that he co-founded in 2000 and Chair of the Chesapeake Bay Foundation Board of Trustees.