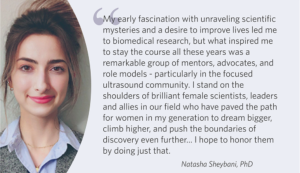 About the Film
Picture a Scientist is an eye-opening documentary spotlighting the personal stories of three female researchers (a biologist, a chemist, and a geologist) as they recall firsthand their encounters with sexual harassment and institutional discrimination in science. Featuring commentary from accomplished and prolific women and allies in science and engineering, the film offers viewers an honest take on the realities of being a woman in science, as well as fresh perspectives on how we can promote a culture of diversity, equity, and inclusivity within the scientific enterprise.

The film highlights critical concepts, such as the “Iceberg of Sexual Harassment,” put forth in a landmark report by the National Academies. This iceberg metaphor captures the acknowledged dimensions of obvious sexual harassment and discrimination that women can experience (i.e., the tip of the iceberg), but it also goes a step farther to identify the all-too-common forms of harassment that lie beneath the surface of public consciousness – such as inappropriate jokes, biased insults, subtle slights like not being included in meetings where you’re the expert, and biases around working mothers, pay inequity, and more. The gender and racial biases that exist not only discourage women from entering STEM fields, but also limit equitable advancement for women and even drive them out of the field altogether, as shown by systematic data collection efforts. 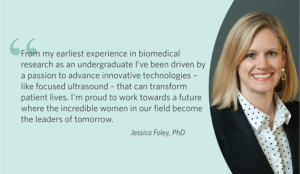 Casting a broader lens on the matter of female representation in academia reveals that the gender gap in engineering widens substantially through the stages of academic tenure and promotion. From 2017-2018, while approximately 51 percent of male tenured/tenure-track faculty were full professors, only 33.9 percent of women tenured/tenure-track faculty occupied this rank (Figure 1). In fact, despite comprising approximately half of the US college-educated workforce, women constitute only about 28 percent of the science and engineering workforce. 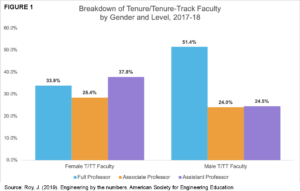 This lack of representation is even more stark for students and faculty of color. Among overall engineering degrees awarded in 2018, only 15 percent of bachelor’s degrees, 14 percent of master’s degrees, and 10 percent of doctorate degrees went to Black, African American, or Hispanic men and women. In 2018, Black, African American, and Hispanic men and women made up only 5 percent of BME faculty. Among women engineering faculty in 2017, less than one percent identified in the categories of “Black or African American” or “Hispanic or Latina” across all faculty ranks, with a near 50 percent dwindling of women in these minority groups from the assistant professor to full professor rank (Figure 2). 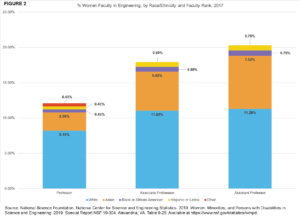 Insights from our Panelists
During a vibrant discussion on January 14, our panelists shared their own reflections on the film including the challenges that exist in our current system, while also highlighting the many positive aspects of careers in science and engineering. By the end of the discussion, we were able to identify ways that we can all work to improve our institutions, organizations, and particularly the field of focused ultrasound.

When asked how they have responded to bias (whether conscious or unconscious) and what can be done to dismantle gender and racial biases, one panelist shared that “I should not have to justify my goals or my ambition. Was it ambitious for me to want to be a scientist? Of course, and I was up to the challenge. I want to encourage young women [and] girls who are looking for a research career or a science career to maintain their course.”

There was agreement of the important role institutions and organizations can play as well, through promoting a culture that values equity, diversity, and inclusion. One example is implicit and explicit bias training – offered/encouraged not just as a one-time training but as part of an ongoing process. Also, one panelist suggested that institutions be “cognizant of the fact that we can’t use exactly the same matrix” when evaluating all students, faculty, or faculty candidates. This would allow recognition that a gap in the CV or publication history shouldn’t be a red flag, but this different matrix does not mean accepting lower quality.

All panelists are advocates for careers in science and engineering for women and, in particular, academic careers. One panelist stressed that “becoming a faculty member is a great job … an enormously fun job where we get to work with young people, we get to explore new ideas, we get to decide what directions we want to go, [and] what directions we think that science should move. It’s an extremely empowering and very flexible kind of job.” She added, “I think that one of our goals really needs to be making sure that people can see themselves as a scientist and can really understand how wonderful a career in engineering and science can be.” But the panelists also recognize the need for institutional support structures for women, particularly new junior faculty (e.g., launch committees), with an eye to professional development and promotion. A goal should be to have a successful diverse workforce at all levels.

Mentorship, sponsorship, and networking are critically important at all career stages. A diversity of mentors – male, female, and with different areas of expertise – can help to advise on different aspects of a woman’s career, e.g., scientific, leadership, professional advancement. Professional organizations offer broad networking opportunities to connect with a wider group outside one’s institution, and this can also be highly beneficial.

Advancing Women in Focused Ultrasound
The closing portion of the discussion unveiled myriad strategies for celebrating and advancing the contributions of female researchers in the focused ultrasound community. Suggested strategies included:

We look forward to exploring and supporting these suggested initiatives with the broader focused ultrasound community over the coming months and beyond.

What Comes Next?
To unite, support, and advance women and allies in the focused ultrasound community, the Focused Ultrasound Foundation is pleased to announce the establishment of the inaugural Women in Focused Ultrasound Interest Group. This group is open to everyone who is passionate about bringing equity, diversity, and inclusivity to our field! It is not exclusive to women and, in fact, we welcome participation by men. Join us today by expressing your interest and completing a brief registration form to join the group and receive notifications about meetings and other activities.

Together we can help write a new chapter for women and girls in science, with the field of focused ultrasound leading the way.

Roy, Joseph. 2019. “Engineering by the Numbers.” In American Society for Engineering Education, 1–40.