Wendel Inspires People to Work Out and Give Back

Phil Wendel was introduced to the Focused Ultrasound Foundation’s mission nearly a decade ago by founder and chairman Neal Kassell, MD. “I loved the way he described that focused ultrasound will transform therapy in the same way that MRI transformed diagnostics,” said Wendel, the founder and CEO of Charlottesville, Va.-based acac Fitness & Wellness Centers. “To know that an alternative therapy exists that will significantly lower costs and make patient experience exponentially better, it was common sense for me to get involved.” 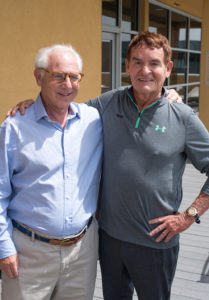 Over the years, Wendel supported the Foundation through personal gifts and attending events. He was particularly inspired after reading John Grisham’s short book, The Tumor.

“Having John call it the most important book he’s ever written, I thought it was clearly a story that needed a broader audience,” Wendel said. “I said to myself, ‘Wow, this is a beautiful story. How can we help, beyond just writing a check?’”

Phil answered that question by designating the Focused Ultrasound Foundation as the beneficiary of acac’s “Work Out and Give Back” campaign that offers non-members a 30-day membership for $30, and donates 100% of funds to a non-profit organization. By the conclusion of the March 2017 campaign, Wendel and his team raised more than $90,000 for the Focused Ultrasound Foundation.

In addition, the campaign created tremendous awareness for focused ultrasound among acac’s existing 65,000 club members in Baltimore, Philadelphia, Richmond, and Charlottesville. Copies of The Tumor were given to members in each of the 12 clubs, and Grisham appeared in a video promoting the campaign, which both he and acac shared via their vast social networks.

“The Foundation is on the cusp of revolutionizing therapy, and you need some people who have a bit of a platform to get the word out,” Wendel said.

We are grateful for the support Wendel, Grisham, and all of the acac team members who made the 30 days for $30 campaign a remarkable fundraising and awareness success.