On March 25, Zhen Xu, PhD, associate professor in the Department of Biomedical Engineering at the University of Michigan, was awarded the 2019 Andrew J. Lockhart Memorial Prize by the Focused Ultrasound Foundation. 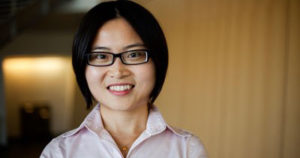 The $75,000 annual prize is awarded to an investigator to recognize outstanding contributions in advancing cancer treatment using focused ultrasound and the potential for continued achievements in the field. The prize was established in 2017 by the family and friends of Andrew J. Lockhart, who passed away in 2016 at the age of 39 after a hard-fought battle with cholangiocarcinoma, a malignant cancer affecting the biliary system.

The primary focus of Dr. Xu’s research is on developing and using histotripsy to treat cancer and neurological diseases. She is one of the original inventors of histotripsy, a process that uses focused ultrasound to mechanically disrupt target tissue, as opposed to thermal ablation – or heating – of tissue.

Dr. Xu’s laboratory at the University of Michigan has pioneered the use of histotripsy in the fight against cancer, leading to a clinical trial in Europe to treat liver cancer. More recently, the group’s research has led to trials for histotripsy treatment of brain cancer and histotripsy for immunotherapy.

“Histotripsy is the first image-guided technique using focused ultrasound to destroy tissue noninvasively, without heating and without the use of ionizing radiation. It works by mechanically liquefying the target cancer tissue and demonstrates the potential to increase accuracy and reduce off-target damage for cancer treatment when compared to radiation or thermal-based approaches,” said Dr. Xu. “Now, we believe that histotripsy can induce a potent immune response, and we hope that this ultrasound technique can also be extended beyond local tumor ablation to treat tumor metastases.”

Andrew Lockhart’s parents, Terry and Gene, said, “This award is intended to recognize and encourage exactly the kind of groundbreaking research that Dr. Xu is conducting. It will take revolutionary ideas to find effective therapies for hard-to-treat cancers like the one that claimed Andrew. We believe that Dr. Xu and other innovators will hasten the advent of such interventions.

On the same day she received the award, Dr. Xu conducted a webinar on histotripsy, which was available via live stream, as well as on the Foundation’s social media channels. During the webinar, Dr. Xu discussed the basic mechanism, instrumentation, bioeffects, and applications of histotripsy. She also covered the latest preclinical and clinical trial results of histotripsy for the treatment of cancer and neurological diseases.

“The magnanimity of the Lockhart family is having a profound effect on the Foundation and on the field of focused ultrasound research,” said Founder and Chairman of the Focused Ultrasound Foundation, Neal F. Kassell, MD. “This prize is a tremendous honor and recognition for Zhen Xu and the previous recipients – and it is a heartfelt tribute to the memory of the Lockhart’s beloved son, Andrew.”

This is the third time the Andrew J. Lockhart Memorial Prize has been awarded. In 2017, the inaugural prize was given to Richard Price, PhD, professor of biomedical engineering, radiology and radiation oncology at the University of Virginia. The 2018 Lockhart Prize went to Graeme Woodworth, MD, professor of neurosurgery at the University of Maryland School of Medicine. A call for nominations for the 2020 prize will be announced later this spring.