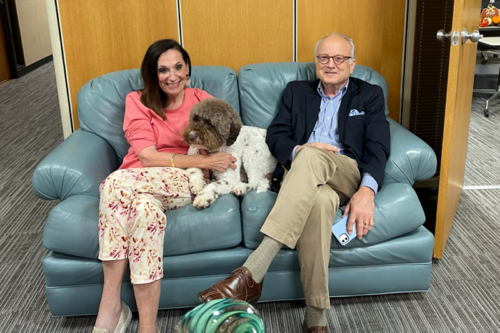 In 2009, Michael Swann’s urologist took the time to explain the significance and importance of regular, annual prostate-specific antigen (PSA) testing. Michael was 60 years old. His first PSA level was 2.8 and it stayed below 5.0 for the next five years. However, in 2015 when he received a 5.1 PSA reading, his doctor recommended a biopsy. Michael saw a prostate cancer specialist for the biopsy, which consisted of cores being taken in six different areas in the prostate. One of those cores showed evidence of cancer.

It was low-risk prostate cancer that was unlikely to spread, so the doctor recommended what is called “active surveillance.” Patients in this situation monitor their PSA levels with annual testing and usually have biopsies every other year. Michael understood treatment might be recommended depending on the level of the PSA or on the biopsy findings. Like many men, he told himself that treatment was unlikely or, at least, far in future, so he did not spend time learning about treatment options.

Michael’s PSA levels remained stable, but samples from back-to-back biopsies in 2017 and 2018 showed additional signs of malignancy. Although the pathology remained low-risk and unlikely to spread, Michael’s PSA levels rose significantly in 2019 and into late 2020. By then, Michael was seeing a new physician who continued to assure him there was nothing to worry about. However, Michael’s concern was growing. The physician ordered an MRI in late December and then performed a biopsy in January 2021.

Next, Michael and his wife, Lynda, met with the physician, thinking they would be discussing treatment options. However, with little explanation, the doctor told them Michael needed to undergo a radical prostatectomy. They were shocked – at both the change in prognosis and in the way it was delivered! There was no discussion of options. The doctor then told them he always did open prostatectomies because he could do a better job than a machine. Michael responded, “So I went from active surveillance to needing a radical prostatectomy in like four months? I don’t think so.”

Michael says, “I left there and never went back.”

While researching his options, Michael talked with his brother-in-law, Eddie Smith, who is a supporter of the Focused Ultrasound Foundation. He suggested that Michael reach out to the Foundation. The Foundation does not provide medical advice to anyone, but they did offer information to help Michael with the right questions to ask and the type of resources to help in his search for an acceptable approach to his prostate cancer.

Ultimately, Michael’s quest for a less invasive treatment option led him to Dr. Stephen Scionti’s office in Sarasota, Florida. Dr. Scionti is a board-certified urologist who specializes in ultrasound prostate cancer treatments. (Read his profile on our website.) Michael was impressed with Dr. Scionti’s experience. When Michael and his wife Lynda first met with him, he spent more than an hour talking with them and patiently answering their questions.

After first treating a significant a bladder outlet obstruction he had detected, Dr. Scionti performed a total gland procedure that treated all the tumors in Michael’s prostate with focused ultrasound. After the second procedure, Dr. Scionti met with Michael and Lynda and said that both procedures went very well.

Michael says, “Dr. Scionti did not exaggerate. The procedures were in June of 2021 and by August, I had virtually no symptoms. That is still true today.”

Michael is still monitoring his PSA levels. After having his bladder obstruction cleared and the ultrasound ablation for his prostate cancer, Michael discovered renewed stamina and energy. He says the two most significant changes in his life were with his family and in his law practice.

He is a lawyer doing full-time mediation. Before the ultrasound procedure he was unable to remain at the table with the negotiating parties for very long. Now he is comfortable working all day without a break. Most of all, though, he enjoys the quality time he can spend with his wife and with his two daughters and their families.

Through it all, Michael has become enthusiastic about encouraging men to advocate for themselves – and on behalf of one another. “Men need to talk about this cancer. Right now, if you mention prostate cancer around a group of guys, they all change the subject. That needs to change.” Michael believes that through open discussion and working to overcome men’s reluctance to discuss their health, they will learn more about how to manage their own well-being – and about focused ultrasound as an option for prostate cancer.