Russian-born Natasha Rapoport, Ph.D., a research professor of bioengineering at the University of Utah, 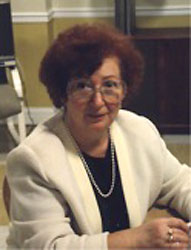 knows something of pain and trauma. Her physician father, Yakov, was jailed in 1953, wrongly accused in an infamous, yet fictitious “Doctor’s Plot” to assassinate Stalin. Natasha was 14 when she opened the door and her beloved papa was whisked away to be manacled and interrogated. Yakov Rapoport survived, and both father and daughter later wrote memoirs. Yakov has died, and Natasha has traded the Moscow forests for Salt Lake’s desert. But she carries on the family scientific tradition in a quest to make currently fatal pancreatic cancer a chronic, or even curable, disease.

Rapoport is the recipient of a $100,000 research award from the FUS Foundation to study the mechanisms of ultrasound action and its role in delivering cancer drugs to tumors. Her project will combine results from two powerful imaging modalities, MRI and RFP (red fluorescent protein), to study in vivo how the cancer drug paclitaxel is delivered by ultrasound to effectively kill pancreatic cancer cells.

“My goals and the goals of the Foundation are so much alike,” she said. “I want to see my development getting into clinical trials and hopefully into clinical practice.”

Her research began a decade ago when she realized that ultrasound enhances drug release from microscopic nanoparticles called polymeric micelles.

“When you encapsulate a drug in nanoparticles, you can target it to the tumor,” Rapoport said. “This is because the blood vessels in tumors are much more permeable than in normal tissues. This is the Achilles heel of the tumor, which allows drug-loaded nanoparticles to get through into tumor tissue without penetrating into normal tissue. Then we focus ultrasound in the tumor to release the drug from nanoparticles.”

But there are so many problems treating pancreatic cancer. The disease is often asymptomatic and discovered too late. And drug diffusion over the tumor is challenging. Plus, Rapoport said, it is common for pancreatic cancer cells to quickly become resistant to drug treatment.

However, Rapoport has found a potential solution, and if she’s successful, perhaps, one day, inoperable pancreatic tumors could be shrunken and made operable. “We inject paclitaxil loaded nanodroplets and they accumulate in the tumor,” Rapoport explained. “The accumulation is enhanced by focused ultrasound, which increases the gaps between endothelial (blood vessel wall) cells. When we sonicate these nanodroplets (irradiate them with ultrasound) they convert into microbubbles and when they convert they release their drug load.” Ultrasound is known to enhance diffusion and help to overcome all biological barriers for a drug to hit its target inside cancerous cells.

In past experiments on mice with pancreatic tumors, she discovered that large tumors regress significantly during treatment with ultrasound-mediated drug delivery under MRI guidance while smaller tumors die and don’t appear to recur after completion of treatment.

“This grant will allow me to find the best ultrasound parameters and optimal nanoparticle parameters for translating to larger preclinical models and then, hopefully, to humans,” Rapoport said. “If we keep getting the results that we’ve obtained in mice, then I think we may get permission to move to clinical trials, at first for compassionate use.”