The press release below was originally issued by Physics for Medicine Paris. Read the release on their site > 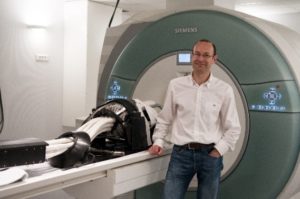 Established in 2009, the Centers of Excellence program of the Focused Ultrasound Foundation brings together the best people and technical resources at luminary sites. The Centers are created through partnerships of academia, industry, and the Foundation to showcase the technology and serve as hubs for collaboration.

Physics for Medicine Paris becomes the third Center of Excellence in Europe, and the eighth worldwide. This prestigious distinction recognizes years of research, led by Jean-François Aubry (scientific director of the Center of Excellence, picture right), aiming at providing patients and clinicians with ultrasound-based therapies as a non-invasive alternative to surgical procedures. With this program, Physics for Medicine Paris will continue and accelerate the development of new ultrasound-based technologies and will foster the translation of their innovative technologies to the clinics with an emphasis on the treatment of cardiovascular diseases and of neurological disorders.

The Center of Excellence will be a technological hub to develop new modalities for ultrasonic guidance, monitoring and treatment to foster collaboration with clinicians in Paris and to collaborate with a growing number of companies to improve existing clinical devices.

The team also plays a pivotal role in educating young researchers, with the training of many PhD students and the organization of a biennial International Winter School on Therapeutic Ultrasound. Remarkably, two PhD students supervised by Jean-François Aubry have just been awarded, on December 3rd, the highly competitive Prix de la Chancellerie des Universités de Paris for the scientific excellence of their theses in “Physics and Chemistry” (Charlotte Constans) and “Mechanics, Electronics, Informatics and Technology” (Guillaume Maimbourg).

About the Focused Ultrasound Foundation
The Focused Ultrasound Foundation was created to accelerate the development of focused ultrasound, an early-stage noninvasive therapeutic technology with the potential to transform the treatment of many medical disorders. The Foundation is dedicated to ensuring that focused ultrasound becomes a mainstream therapy within years, not decades, and works to fund research, foster collaboration and build awareness among patients and professionals. Since its establishment in 2006, it has become the largest nongovernmental source of funding for focused ultrasound research. The Foundation has recognized eight international Centers of Excellence since the program was established in 2009.