Beginning at age 25, Steve noticed he was losing control of his grip. “I was working a mobile repair service that installed new airbags and interior components in vehicles that had been in a wreck,” he explains. “I started to lose my ability to hold tools, turn screwdrivers, and use wrenches effectively.” After visiting several local neurologists, Steve was referred to Dr. Shannon at Rush University in Chicago and was diagnosed with young onset Parkinson’s disease. 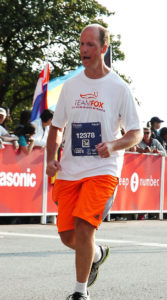 “It was pretty devastating news,” he recalls. “We had a three month old son at the time, and it raised so many questions about what the future might hold.”

As the disease progressed, Steve noticed gait problems, stiffness, and tremors. One of the most debilitating symptoms was the dyskinesia, or involuntary movements, which is associated with medications used to control the Parkinson’s. “As my medications were kicking in, my head and limbs would start to move more than normal, and it was uncontrollable and embarrassing because people would think I was drunk.”

As his condition began affecting his work, Steve was no longer able to do the custom auto work due to his tremors. His ability to interact with customers was diminishing due to the altered facial expressions, a side effect of the Parkinson’s, which were commonly misinterpreted.

He also found that his symptoms interfered with many of his hobbies. As his local high school’s bowling coach, it became difficult to demonstrate correct form for his students as he struggled with balance control and flexibility. Also an outdoorsman, Steve was unable to bike and run safely, and he found himself shying away from social situations as his verbal and motor control worsened.

But social media, and a little digging, led him to an answer – focused ultrasound. “I saw a video on Facebook of a gentleman in Israel who had the procedure done,” he recalls. “I searched online and found that the trials were being conducted in Virginia, Maryland, and Canada and I applied to them all.” Ultimately, he was accepted as the second patient treated at the University of Maryland for Parkinson’s dyskinesia. His procedure was scheduled for November 2015. Steve was 39 years old.

“I was not nervous about being in a clinical trial. I tried not to have too many expectations, and I wasn’t expecting an absolute cure. I just wanted to improve my quality of life.”

But the results were immediate. “After the treatment, I noticed a difference right away. I was able to push myself up and out of bed. I still noticed some tremors, but they were much better. My dyskinesia was completely gone, which was a relief. It took a lot of energy to constantly try to hide that.”

Now, nearly 18 months after his treatment, Steve is doing well. He still reports no dyskinesia, and now his doctor is able to treat his other symptoms by adjusting his medications. Although he still has Parkinson’s disease and does experience some off days, Steve says the procedure was well worth it and would do it again if the option came up to treat the tremors.

“My daily life is easier, and I don’t feel as if my wife and son have to care for me as much. My quality of life has improved, and it’s been invigorating to get back to bicycling and enjoy nature.” 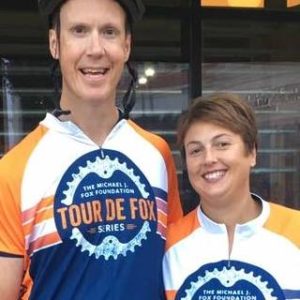 Since his procedure, Steve and his family have hit the ground running – literally. He and his wife completed 40- and 50-mile bike rides this past year, and have participated in multiple 5K’s all in support of Team Fox. Also he and his family are planning their second Team Fox Fundraiser called the Party to Fight Parkinson’s, which will be held at Signature Lanes in Elkhart, Indiana where he is the head youth bowling coach and also the high school coach. Last year, Team Squires raised more than $7,000, and this year their goal is $15,000.

“I would definitely recommend this treatment. I am hoping the technology develops to the point where I can have the other side of my brain treated.* But for now, the improvement in my quality of life has been immense. I am happy to be a pioneer, and I hope to inspire others to sign up for clinical trials. The only way we will find new treatments and possible a cure is if people are willing to participate in exciting research.”

Watch a video of Steve before and after his treatment >

*Focused ultrasound is currently being investigated to treat only one side of the brain. Patients usually opt to treat the side that controls their dominant hand.