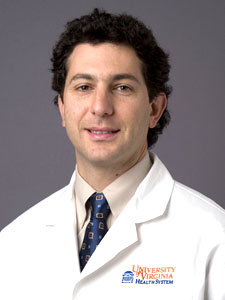 few years ago from colleague Neal F. Kassell, M.D. at the University of Virginia. At first, Elias was intrigued but, well, maybe a little busy. He was absorbed in a growing practice and had new twins at home. But he seized the chance to study the technology when UVA opened its Focused Ultrasound Center. “I realized it was going to be a very unique opportunity for us to be involved in early and innovative research,” Elias remembers.

Today, Elias is pioneering MR-guided focused ultrasound as a treatment for movement disorders. Backed by funding from the Focused Ultrasound Surgery Foundation, he has launched a first in the world clinical trial using MR-guided focused ultrasound to treat patients with essential tremor, a type of involuntary shaking with no known cause. Designed to assess the safety and initial efficacy of the treatment, the study is expected to treat as many as 15 patients and involves making a precisely targeted small lesion with focused ultrasound in the thalamus, a deep region within the brain.

Elias recently received two research awards from the Focused Ultrasound Surgery Foundation totaling $196,000. The first award is supporting preclinical research of the safety, feasibility and histology (tissue structure) of MR-guided focused ultrasound compared to other intracerebral lesioning techniques, specifically Gamma Knife radiosurgery and surgical implantation of heating probes. Gamma Knife, for instance, takes time to work, he says. It can take weeks or months for the radiation to take effect and cause a lesion in the brain and, in the meantime, the patient still has the disorder. And radiofrequency treatment carries an inherent risk of bleeding since a probe is inserted through the skull and into the brain.

“We think that focused ultrasound will provide precise and discreet lesioning that’s sharper and more well-demarcated than other techniques,” Elias said. “But that’s just the hypothesis. We’re in the process of studying and comparing these techniques. What we find may allow for very precise targeting and perhaps even safer treatments for movement disorders.”

The second research award is enabling Elias and his team to study the safety and feasibility of focused ultrasound for the further treatment of people who have undergone deep brain stimulation. DBS is currently the primary therapy for patients with Parkinson’s disease and similar movement disorders.  Elias wants to know whether MRI-guided focused ultrasound is effective in treating residual symptoms when an implanted neurostimulator is already in place.

“Our hope is that this research will provide greater understanding of focused ultrasound technology and therapy and facilitate its use and acceptance into the clinic for the treatment of movement disorders,” Elias said.