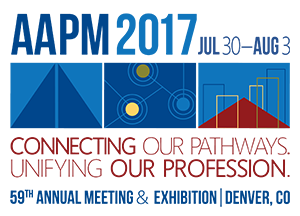 The American Association of Physicists in Medicine (AAPM) held their annual meeting from July 30 through August 2 in Denver. The focused ultrasound presentations covered topics ranging from the history of cancer immunotherapy and the role FUS can play in immunomodulation; clinical case studies in the use of FUS for the treatment of bone tumors and movement disorders; and the development of new FUS devices for brain treatments. “Many of the clinicians who attended this meeting share our views on open science and collaboration,” said the Foundation’s Director of Extramural Research, Matt Eames, PhD, after attending the sessions. “I was pleased to hear how the principles that are permeating our work at the Foundation (and other medical not-for-profit organizations) are also being advocated in the medical physicist community.”

TU-A-708Therapeutic Ultrasound and Immunotherapy: A Primer by Elizabeth Repasky, Roswell Park Cancer Institute, Buffalo, NY, presented an overview of immunotherapy and specifically discussed the ways in which focused ultrasound may be used to modulate existing immunotherapy approaches. Checkpoint inhibitors can permit a powerful immune response by competitively binding receptors or molecules that would otherwise inhibit an immune response.

Therapeutic Ultrasound and Immunotherapy: A Primer

Therapeutic Strategies and Image Guidance in HIFU
A session designed to provide a broad understanding and the current status of ongoing research efforts in the area of therapeutic ultrasound.