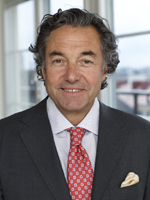 entrepreneur and business executive, the other a physicist and world-class academic researcher – will be among the featured speakers at the 2nd International Symposium on MR-guided Focused Ultrasound in Washington, D.C. from October 17-20, 2010.

The Focused Ultrasound Surgery Foundation has announced that Laurent Leksell, co-founder and long-time President and CEO of Gamma Knife-maker Elekta AB, will deliver the symposium’s keynote Batten Family Lecture. Based in Sweden, he currently serves as an executive member of Elekta’s board and is a member of its executive committee for the Asia Pacific Region.

Leksell founded Elekta in 1972 with his father, the late Professor Lars Leksell. Over a 30-year period, he led the company’s transformation from a small privately-held firm into an international medical technology enterprise that now has 2,500 employees and subsidiaries in 18 countries. In 2007, Leksell was named Swedish Entrepreneur of the Year. He holds a PhD in Economics from Handelshogskolan i Stockholm as well as an MBA.

In addition to his role as symposium president, Kullervo H. Hynynen, PhD, will present the David and Diane Heller Lecture covering the past, present and future of focused ultrasound technology. Hynynen is a distinguished physicist and a pioneer in the surgical and therapeutic use of focused ultrasound. He holds appointments as Canada Research Chair in Imaging Systems and Image-Guided Therapy (Tier 1), as Professor, Department of Medical Biophysics, University of Toronto and as Director and Senior Scientist, Discipline of Imaging Research and Director of the Centre for Research in Image-Guided Therapeutics, Sunnybrook Health Sciences Centre, Toronto.

One of the most published and cited researchers in the field, Hynynen has investigated the use of focused ultrasound for noninvasive surgery, vascular surgery, targeted drug delivery and gene therapy. Currently, he is exploring new ultrasound imaging methods for therapy delivery and tumor diagnosis.