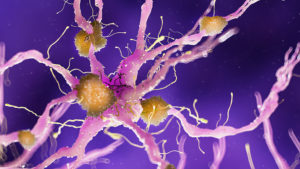 Researchers at Yonsei University College of Medicine in Seoul, Korea, recently published the results from their proof-of-concept study using focused ultrasound to bilaterally open the blood-brain barrier (BBB) in the frontal lobe of patients with Alzheimer’s disease.

The clinical trial enrolled six participants to study the procedure’s safety, feasibility, and possible efficacy when opening the BBB in a large area of the brain. Each participant received two treatments that were three months apart. Treatment monitoring included MRI, positron emission tomography (PET), a caregiver neuropsychiatric survey, and physician evaluation before and after each procedure. Across all participants, the mean volume targeted was 21.1 ± 2.7 cubic centimeters (cc) with BBB opening confirmed at 95.7% ± 9.4% of the targeted volume and no observed adverse effects.

“These preliminary data provide evidence that a larger trial is now indicated,” said Tim Meakem, MD, the Foundation’s Chief Medical Officer. “The next progression for the Korea group will likely be to continue to expand the treatment area and apply the focused ultrasound bilaterally to open the BBB across a larger area of the brain.”

Similar clinical trials for Alzheimer’s disease are currently underway in the United States and Canada, but the parameters differ in each study. In the US, a multicenter study is opening the BBB in a smaller area in the right hemisphere and providing three treatments two weeks apart. In Canada, researchers initially opened the BBB on one side of the brain and are progressing to repeated bilateral BBB opening (three times) with smaller tissue volume.