Jacksonville Mom of Two: “Curawave Gave Me My Active Life Back” 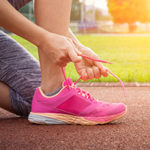 Q. Tell us first how long you suffered with fibroids and how you were affected by them.
I think I experienced fibroids for a shorter period of time than many women, because it was probably about 12 months total. But when I became symptomatic, it came on very quickly and was extremely intense. I went from having very light periods to bleeding heavily for two weeks at a time and even going to the ER because the bleeding made me anemic. I was constantly bloated and always tired – I remember having to catch my breath at the top of my stairs, and I’m usually someone who jogs, plays tennis, does Pilates, and runs around after my two young children! I even lost the ability to go running for a while, which was devastating as it had been an integral part of my mental and physical health. And honestly, I was just grumpy, downtrodden, in a permanent brain fog, and felt like I had to be at home or near a bathroom all the time because I was afraid I might bleed everywhere. I would say it was a significant downward spiral for me from when symptoms began until I got treated.

Q. How did you hear about the Fibroid Education Center and Curawave (focused ultrasound)?
I came across the treatment online on my own. My OB-GYN had been insistent that I needed a hysterectomy, and I just refused to believe that was my best option. He had not even heard of focused ultrasound, by the way. So I started researching other treatments – I really feel like women have to take charge of their own healthcare and be their own advocate. So that’s what I did. And then it was actually my husband who finally begged me to make the call to learn more.

After I called the Fibroid Education Center number, the rest was very easy. I was able to get some questions answered by the FEC staff, and then they put me in touch with Dr. Susie who was also in Florida but still several hours from me. I had an MRI done locally and sent her the pictures, and then once she reviewed the images we had a consult over the phone to see if I was a suitable candidate. It was that simple. I remember that she walked me through all the different treatment options on the phone, and gave me the pros and cons, and I really appreciated that. I think I spoke with her in June and that same day I was able to schedule my procedure for August! I was just ready to do it, and was at my wit’s end.

Q. What can you tell us about your treatment experience and recovery?
First of all, I loved everything about Dr. Susie. She was extraordinarily competent, and on top of that she was very reassuring as well, and so empathetic. As far as the treatment itself, her staff could not have been better. I had two nurses at my side assisting me the entire time, as well as Dr. Susie who would come in and out of the procedure control room to keep me informed. I only had one orange-size fibroid to ablate so my procedure time was pretty short, maybe just a couple of hours. And I will say that I felt some moderate cramping and discomfort during the procedure, with each sonication, so maybe I should have taken a little more pain medication while I was being treated. But I would do it again, even if they said the procedure would take three times as long! And the greatest part was that I literally got up off the table when it was over, walked out of the room, and I didn’t feel ANY discomfort after that. So it’s hard to complain about a little pain during the procedure when you have zero recovery time afterward. I also noticed immediate relief post-treatment in that the constant pressure and bloat I’d gotten so used to was simply GONE. It was amazing. And then I was literally having lunch at The Breakers in Palm Beach with my family afterward – the same day as my procedure!

Q. How are you doing now, six months out from focused ultrasound treatment? Any residual symptoms?
I’m doing great. Each month is better than the last. Dr. Susie had warned me that my first few periods after the procedure could still be heavy, and that was true. So it didn’t eliminate all my symptoms in that sense. But lately my periods have gotten lighter and lighter, and more regular, so it’s been a steady improvement. I’ve also been able to decrease the iron supplements that I’ve been on, and I’ve resumed all my regular activities – I’m running again, playing tennis, etc. That’s just been wonderful for my body and my mental health. That’s been huge for me.

I’m truly very thankful that I had the procedure. It’s made a tremendous improvement in my quality of life, and it’s allowed me to feel like myself again. I had it done right before I turned 40 and I’m so glad I turned 40 on an upswing! Curawave was a huge birthday gift to myself!

Read a Q&A with her doctor, Suzanne LeBlang, MD >