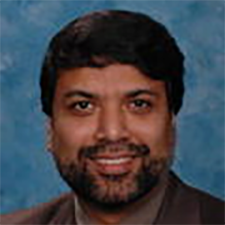 At February’s Cancer Immunotherapy workshop, Chandan Guha, MBBS, PhD, presented his preclinical work using focused ultrasound (FUS) to create a “tumor vaccine.” To achieve this, he used low intensity FUS (LOFU) to give the tumor a sonic shock prior to applying high intensity FUS (HIFU) thermal ablation. The sequential application of LOFU and then HIFU induced a significant tumor-specific T cell immune response in preclinical mouse models of solid cancer. Dr. Guha hypothesized that the LOFU treatment caused cellular stress and protein misfolding, which increased the immunogenicity of the tumor and enabled the HIFU to be more effective in not only ablating the tumor but inducing strong anti-tumoral immunity. He has also combined LOFU with conventional treatment modalities (such as chemotherapy and radiation therapy) with good results.

Chandan Guha, MBBS, PhD, is the Vice Chair of Radiation Oncology at the Albert Einstein College of Medicine (Einstein) and Montefiore Medical Center and Professor of Pathology, Urology, and Radiation Oncology at Einstein. He is also the founding director of Einstein’s Institute for Onco-physics. Dr. Guha’s research work is in the fields of immunology, radiation oncology, and liver diseases, and has been focused on two areas: 1. Immunotherapeutic approaches for cancer therapy, and 2. Use of regenerative strategies to repopulate injured tissue by use of stem cell-based technologies. As a clinician, he is also involved in treating prostate and liver cancers and is an investigator in several worldwide clinical trials.

As an alternative approach for treating solid tumors, Dr. Guha is studying the use of LOFU, applying lower energies of ultrasound to induce vibration, mechanical friction, and mild thermal injury to the tumor cells without causing cell death.

What are your areas of interest in FUS?
Cancer Immunotherapy, cell transplantation, and treatment of solid tumors.

What mechanisms and clinical indications do you study?
Our group uses LOFU to induce a “sonic shock” in tumor cells, and we follow that with partial or complete HIFU ablation of those tumor cells. The ultrasonic stress causes the cytoplasmic proteins to go through an unfolding process in the aqueous environment of the cell, which stresses the endoplasmic reticulum (ER). Because the ER is the cell’s protein factory, the ultrasound-stressed cell breaks the misfolded proteins into small peptides. The immune system’s T cells recognize the peptides, because they are small breakdown products of the defective proteins. T cells normally kill cells that harbor viruses, bacteria, and tumors with mutated proteins.

The group at Einstein is developing a LOFU system with non-ablative LOFU beams that are safe and effective. They are looking for ways to combine LOFU and conventional therapies (e.g., chemotherapy and radiation therapy) with tumor immunotherapy (think cancer vaccines), and hope to find treatment solutions for prostate, breast, colon, liver, pancreas, and lung cancers.

How large is your research staff/team?
Our laboratory within the department of Radiation Oncology and the Institute of Onco-physics at Einstein includes 10 scientists.

What is the goal of your work?
Therapeutic ultrasound is mostly used for ablation with MR thermometry, which is only good at high temperatures and has issues with bone barriers and moving organs. It also has no validated simulation technique. It is in its early stages of development compared to clinical radiation therapy. My interest is not ablation; it is centered on sonic stress and the immune system.

Our work in cancer immunotherapy started in 1999. In a metastatic mouse model, we learned that the combination of dendritic cell activation with tumor irradiation produced a systemic immune response that helped treat the primary tumor and reduced the occurrence of metastatic tumors. The right amount of radiation could stimulate dendritic cells, elicit the immune response, and prolong life by preventing or significantly delaying tumor growth and progression. We are now applying the principles of immunomodulation to LOFU.

What are your results?
LOFU essentially gives the cell a thermal and mechanical shock. We apply the low thermal stress (not hyperthermia), or “sonic stress” for 1.5 to 3 seconds (a tiny pulse). We move the focal point across the tumor like a grid, or lattice, with a gap between focal points. In our mice models for prostate cancer, lung cancer, and melanoma, we found no difference in growth pattern between an untreated tumor and LOFU-treated tumor. But when we looked at the tumor cells, we found evidence of stress and an “unfolded protein response” or UPR. In UPR, the cell’s protein factory has a quality assurance problem. The proteins denature, and heat shock proteins (HSPs) bind to the unfolded proteins and take them to proteasomes, where they are chopped into small peptides. When a live cell has a lot of HSPs bound to denatured cellular proteins, the body will respond and elicit the immune response.

Now we need ablation. The LOFU followed by HIFU created a T-cell—mediated immune response. The same phenomenon is observed when the LOFU is followed by radiation. These combinations create a more potent effect; essentially, any ablative technology will benefit from LOFU.

Our work stems from the idea that many different therapies cause tumor death, yet the immune system never responds to these antigens. Radiation is a good partner with immunotherapy because radiated tumor cells are more immunogenic that regular cells. Radiation induces cell surface death receptors (FAS) that when bound by its ligand causes cell death. Radiation makes the tumors cells more sensitive to the immune attack.
In our opinion, HIFU ablation is not the most optimal way to induce immune activation because ablating tumor tissue completely destroys its infrastructure. Our research is exploring a wide range of focused ultrasound parameters and their effects on the immune response. We hypothesize that FUS parameters that are sub-ablative will show a greater impact on inducing anti-tumoral immunity after ablation.

Who are your internal and external collaborators?
We have worked with SonaCare Medical, and our current research system was made by Philips for animal research. Internally, Dr. Steve Almo, a biochemist, and Dr. Fernando Macian-Juan, an immunologist, collaborate on this work, and there are others.

What is your research wish list?
We are in the process of filing intellectual property on our ideas and methods. We are designing a new mobile ultrasound/LOFU device for conducting clinical trials, and we would like to partner with investigators and institutions with similar goals.

Did the Foundation play a role in this project?
One of our graduate students was awarded a travel grant from the Foundation to attend the annual meeting.