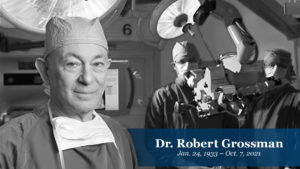 We are saddened to report the death of Robert Grossman, MD, a pioneering neurosurgeon and chair of the Foundation’s Data Safety Monitoring Board.

Dr. Grossman was chair of neurosurgery at Houston Methodist Hospital for more than 30 years and remained part of the research faculty there until his death.

He was internationally known for his contributions to advancing the treatment of head and spinal cord injuries, Parkinson’s disease, dystonia, and epilepsy. Unfortunately, he succumbed to complications of Parkinson’s disease, one of the afflictions for which he worked diligently to find a cure.

Dr. Grossman received his MD from Columbia University College of Physicians and Surgeons and went on to train at Strong Memorial Hospital University of Rochester and the Neurological Institute of New York Presbyterian Hospital-Columbia University. He was also a resident at Parkland Hospital in Dallas in 1963, where he was one of the first to examine the fatal wounds of President John F. Kennedy.

He became involved with the Foundation in 2010 and – along with the other members of the Brain Data Safety Monitoring Board – assisted in developing the framework for the Foundation’s Brain Program, which has long been a central initiative for the organization.

Read his Obituary in the Houston Chronicle >