From Staccato Back to Legato: Violin Enthusiast with Parkinson’s Regains Hand Control with Focused Ultrasound

Rich Nagy was on a motorcycle camping trip on the backroads of the Mid-Atlantic in 2017 when he first began experiencing the symptoms of Parkinson’s disease (PD). “I was making a fire and started to fan at the flames with my hand, and then my hand just kept waving and I couldn’t make it stop.” Over time, his symptoms worsened, and he was eventually diagnosed with PD by a neurologist in his hometown of Gilbertsville, Pennsylvania. 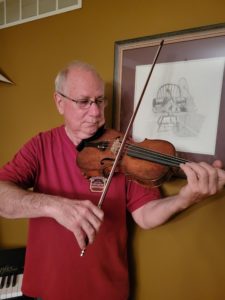 An analyst by trade “who’s never been sick with anything,” Rich poured himself into researching the pros and cons of the various treatment options available to him. He found a lot of information about an invasive procedure called deep brain stimulation, and for a while he tried many iterations of drugs that did not seem to help. His symptoms, which included the “pilling” and shaking typical of PD, were becoming unbearable and disrupting his sleep and mood. Rich eventually connected with Dr. Jeff Elias at the University of Virginia (UVA) in Charlottesville, who told him that he was a candidate for focused ultrasound.

“I was excited – and nervous. I knew Dr. Elias had treated about 50 Parkinson’s patients in his clinical trial and that they had done well. But so many people have never heard of focused ultrasound. And at the time of my procedure, it was only covered by Medicare in one region of the country. So, it’s relatively new,” says Rich.

In October 2020, Rich traveled down to UVA for his focused ultrasound procedure with his family in tow – including his twin brother – and brought along his violin. “I hadn’t been able to play it for several years. I couldn’t stroke the bow, all I could do was make the bow bounce, which of course is not good unless you’re going for [a staccato sound],” he explains.

Rich said the actual focused ultrasound procedure lasted about two hours, during which he recalled approximately four sonications of ultrasound were applied to the target in his brain. While the location on his head where the ultrasound passed through his skull was “noticeably painful and warm” during the treatment, “they had warned me that might happen, and it really wasn’t that bad.” Adds Rich, “What was really cool was that they would bring me out of the MRI machine after each sonication and have me move my hand and test its motion. And after I think just the third sonication, I already had no involuntary motion in my hand at all!”

After Rich walked out of the treatment room, a family member handed him his violin, “And I had full control of it and played it a bit. I thought, ‘Oh my God, wow. I’m cured.’ The nurse practitioner who was there with us was crying. It was beautiful.”

Rich also noticed that the tension and nervousness that is often associated with PD was immediately gone, and he felt extremely relaxed: “It was the first time in several years that I actually felt normal.”

He noticed a few side effects within a week or so after the treatment, including numbness on an area of his skull that has since abated, and some issues with balance which have also improved over time. Today, about six months after his treatment, Rich notes that he has mild waviness in his right hand that he can control and has begun experiencing mild symptoms on his left side, likely due to disease progression. He says, “I’d really like to get back in there to treat the other side, and maybe get a tune up, if I’d be allowed to do that.” 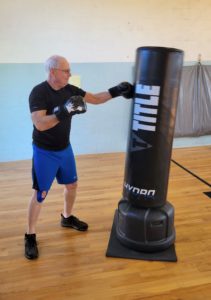 Today Rich – who turns 70 this month – does not need any medications to help with movement issues, and he remains committed to living an active life, including being intentional about exercises that help him maintain his flexibility and ward off the stiffness that is often associated with PD. He has seen many benefits from his twice-weekly PD “Rock Steady Boxing” class, which is based on the premise that boxing conditioning in itself has been shown more than any other type of exercise modality to help reduce the symptoms of PD. Rich says the class – which is a mixture of exercise and boxing – includes sequencing and punching combinations, footwork to increase coordination, and core and balance work that he finds very beneficial, and fun.

“Anything that allows me to live a longer better life, I’m all in,” he says. “Parkinson’s can be an unrelenting disease. It’s imperative to have a great support system, to exercise, and to have a positive attitude. And for me, focused ultrasound was a wonderful decision. I have absolutely no regrets about doing focused ultrasound. I’m thankful to have been able to do it, and I encourage anyone who might be considering the treatment to pursue it whole-heartedly if they’re a candidate.”