We are sad to report the deaths of two dear friends and Foundation supporters, Albert Small, Sr. and Leigh Middleditch, Jr. Both men were proud to be involved in the Foundation’s efforts to drive progress in the field of focused ultrasound.

Albert Small, Sr.
Mr. Small was a real-estate developer and philanthropist who graduated from the University of Virginia in 1946 with a degree in chemical engineering. After serving in the Navy during World War II, he co-founded Southern Engineering Corporation, a real estate development firm. Mr. Small was an important collector of American historical documents, maps, engravings, and books. In 2004, he donated his remarkable collection of autographed documents as well as rare, early printings of the Declaration of Independence to the Special Collections Library at the University. Mr. Small also donated his collection of documents about the formation, development, and history of Washington, DC, to George Washington University, where he created a museum to foster scholarly inquiry about the creation of the nation’s capital.

One of Mr. Small’s granddaughters, Isabella Small, joined the Foundation in 2016 as a multi-year intern and became a part of our research team. The two are pictured above. In 2019, Isabella interviewed her grandfather on behalf of the foundation. Read Her Interview > 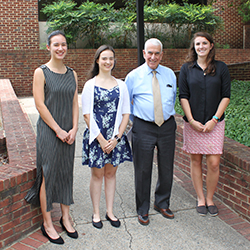 Leigh Middleditch, Jr.
Mr. Middleditch graduated from the University of Virginia’s College of Arts and Sciences in 1951 and UVA School of Law in 1957. He then served active duty with the navy, retiring in 1972 as a captain in the Naval Reserve.

He co-founded the Sorensen Institute for Political Leadership at UVA, which trains leaders in the art of political negotiation and nonpartisan cooperation. Mr. Middleditch also served on UVA’s Board of Visitors and as a Legal Advisor to the University.

He served as Counsel in the Charlottesville, Virginia, office of McGuireWoods LLP, specializing in non-governmental and exempt organizations. He was also passionate about ending the state’s decades-old partisan redistricting process.

In addition to many Boards in the Charlottesville area, Mr. Middleditch was a member of the Board of Trustees of the Claude Moore Charitable Foundation, an organization formed to initiate programs and partnerships that increase academic competence and encourage leadership. To this end, the Claude Moore Charitable Foundation has been a generous supporter of the Focused Ultrasound Foundation’s Summer Technical Internships since 2014. Mr. Middleditch was excited by the program’s ability to foster interest in focused ultrasound technology among the next generation of researchers. He enjoyed learning about focused ultrasound through the young, bright minds of the interns and attended their final presentations every August. He is pictured here with three of the Foundation’s past summer interns.