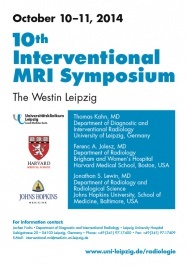 Several oral presentations on FUS were given including:

Several oral presentations on FUS were given including:

“Focused ultrasound has a growing role in the field of interventional MRI,” said Dr. McDannold. “The scientists at these international meetings are well aware of the impact it is having in medicine.” The Symposium’s entire abstract book is now available online.