Focused Ultrasound for Lung Tumors: From Impossible to Possible

In addition to primary lung cancer, focused ultrasound could potentially treat metastatic lung nodules from other primary cancers, such as colon cancer. Both primary and metastatic lung tumors often present with severe pain, pneumonia, and hemoptysis – coughing up blood. At the 2018 Focused Ultrasound Foundation Symposium, Joan Vidal-Jove, MD, PhD, a surgical oncologist from Barcelona University Hospital, presented the first case report of a patient with a metastatic lung tumor treated with focused ultrasound. This particular case was unique, as the tumor was located in the lung periphery, making it more readily accessible to the focused ultrasound beam, while avoiding air in the beam path. 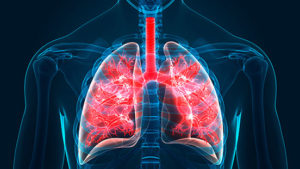 As recently as five years ago, the prevailing belief was that focused ultrasound could never be applied to human, in vivo lung tissue due to its unique anatomy and structure. Any air, including the air within the alveoli – small air spaces within the lung where gas exchange occurs – distorts and reflects ultrasound energy, making it impossible to focus the beams in a single, precise area. Additional challenges to treating lung tumors are caused by the overlying ribs, which do not allow ultrasound beams to pass through, and motion due to breathing. However, a novel approach called one lung flooding may now allow focused ultrasound access to lung tumors.

One lung flooding involves filling one lung with saline in order to “wash out” all of the air within that lung. The fluid allows focused ultrasound to reach the target efficiently and safely. General anesthesia is employed during this process, and the non-treated lung is mechanically ventilated. One lung flooding has been shown to be safe and effective at creating an air-free lung environment in which focused ultrasound can be successfully applied in preclinical models.

The advent of this technique has created much hope for focused ultrasound in an area where there used to be none. Frank Wolfram, PhD, a medical physicist in Germany, was the primary investigator for these groundbreaking lung flooding studies. In a recent trip to the Foundation, he shared this work and his vision for future clinical trials involving focused ultrasound for primary and metastatic lung cancers.

Although research is in the preclinical stage, the fact that progress is being made and we are closer than ever to a human clinical trial is promising, given the initial impression that it was near impossible to treat lung tissue with focused ultrasound. There are scientists and clinicians around the globe who are excited about the potential impact that focused ultrasound could have on lung tumor treatments and improving the quality of life and survival for those with both primary and metastatic lung tumors. It is the Foundation’s mission to safely expedite this process in order to touch the lives of patients as soon as possible.

Lauren Powlovich, MD, is the Science Associate and Medical Writer at the Focused Ultrasound Foundation.