Charlottesville, VA – September 1, 2015 — Researchers at the University of Maryland and the University of Virginia have performed the first focused ultrasound treatments in the United States for dyskinesia associated with Parkinson’s disease. 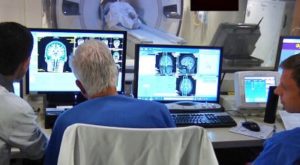 These treatments are part of international pilot studies of 40 patients assessing the feasibility, safety and preliminary efficacy of MR-guided focused ultrasound pallidotomy for dyskinesia that occurs with Parkinson’s disease.

Investigators are using magnetic resonance imaging (MR) to guide ultrasound waves through the intact skin and skull to reach the globus pallidus, a structure deep in the brain. If successful, focused ultrasound could offer an alternative approach for certain patients with Parkinson’s disease who have failed medical therapy or become disabled from medication-induced dyskinesia. To date, seven patients in Korea and one patient in Canada have been treated in studies.

“We are excited to offer our patients a new, non-invasive therapy to control their Parkinson’s symptoms,” said Howard M. Eisenberg, MD, Chair of Neurosurgery at the University of Maryland School of Medicine. “The neurology community has made significant strides in helping patients with Parkinson’s over the years; utilization of MR-guided focused ultrasound could help limit the life-altering side effects like dyskinesia to make the disease more manageable and less debilitating.”

The Parkinson’s dyskinesia studies are being conducted using the ExAblate Neuro system developed by Insightec. “This is another major achievement in the development of focused ultrasound, which is under investigation to provide less invasive relief to patients suffering from movement disorders. We congratulate the teams in Maryland and Virginia for their pioneering spirit and support of the technology,” said Eyal Zadicario, Vice President for R&D and Director of Insightec’s Brain Program.

Funding for the Parkinson’s dyskinesia studies has been provided by the Focused Ultrasound Foundation and The Michael J. Fox Foundation for Parkinson’s Research, in collaboration with Insightec as regulatory sponsor. Eligible patients will include those whose medication has failed to satisfactorily control dyskinesia, who are not candidates for surgery or who choose not to undergo surgery. If the trials are successful, a large study is planned in advance of seeking FDA approval and reimbursement of focused ultrasound to treat Parkinson’s disease.

“This milestone marks an important step forward in the development of focused ultrasound as an alternative for Parkinson’s and other movement disorders as well as brain tumors,” said Foundation Chairman Neal F. Kassell. “This progress reflects the work of many innovative minds and the collaboration of several organizations committed to advancing paradigm-shifting solutions.”

About Parkinson’s Disease & Dyskinesias
Parkinson’s disease, which results from the death of nerve cells in the brain, is a chronic, degenerative neurological disorder. It affects more than 5 million people worldwide. Since the risk of developing the disease increases with age, research indicates that one in 100 people over the age of 60 suffer from this debilitating disease.

Dyskinesias are involuntary movements that can become embarrassing and/or disabling. They represent a common and problematic complication of the medical treatment of PD using drugs such as levodopa. Management of dyskinesias with medications is challenging and often unsatisfactory.

About Focused Ultrasound for Parkinson’s
Magnetic resonance (MR)-guided focused ultrasound is a non-invasive method to destroy a small volume of targeted tissue in the globus pallidus region of the brain to both improve motor symptoms and reduce dyskinesias. Focused ultrasound treatment is performed with the patient awake and involves neither anesthesia, incisions in the skull, nor insertion of electrodes into the brain, thus decreasing the risk of complications such as injury to brain tissue, infections, hemorrhages or blood clots.

About Focused Ultrasound
Focused ultrasound is a revolutionary, early-stage therapeutic technology with the potential to transform the treatment of many serious medical disorders. This breakthrough technology uses ultrasonic energy guided by magnetic resonance or ultrasound imaging to treat tissue deep in the body without incisions or radiation. Multiple intersecting beams of ultrasound are directed and concentrated on a target as small as a grain of rice, much like a magnifying glass can focus multiple beams of light on a single point.

Focused ultrasound is currently approved in the U.S. to treat uterine fibroids and bone metastases, and there are a growing number of clinical applications in various stages of research and development around the world, including Parkinson’s disease, essential tremor, neuropathic pain, breast and prostate cancer, and brain tumors.

The Focused Ultrasound Foundation was created to improve the lives of millions of people worldwide by accelerating the development of focused ultrasound. Since its establishment in 2006, the Foundation has become the largest non-governmental source of funding for focused ultrasound research.