Mark Nemschoff and Muffin Nemschoff Alschuler spent years watching their mother’s quality of life deteriorate as her tremor progressed to where she had great difficulty feeding herself for the last 20 years of her life. And then both of them felt their own tremor progressing, and sought relief. 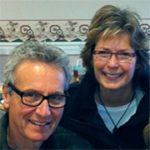 Muffin took medication with moderate success for some time, but Mark was not a candidate for medication and searched for other options. His quest led them to become the first siblings to be treated with focused ultrasound. In 2013 Mark traveled to Solothurn, Switzerland for treatment by Prof. Daniel Jeanmonod, MD. Muffin was treated there in 2014.

Mark suffered with a tremor since the age of 40. While he was busy in the healthcare furniture business, he managed to hide the tremor as much as possible. But with age his tremor increased, and not being a candidate for essential tremor medication like his mother and sister, he needed to find another option.

He explored deep brain stimulation, but didn’t want to “live the rest of my life with wires in my head.” In 2011, he learned about focused ultrasound from a TEDMED talk and set out to learn more and find access to the treatment. He did not want to wait for the lengthy US clinical trial process, nor the possibility of receiving a sham procedure if selected. Instead he sought treatment in Switzerland in 2013.

The actual procedure was just a few hours, though the stay was 5 days including evaluation and follow-up. “It was magical, almost amazing,” he says. He was so happy with the result that he called Muffin from Switzerland as soon as it was over. “I’m holding the phone in one hand and a full glass of water in the other – and you have to do this too!” he said. She was hesitant at first, but, after seeing her brother’s continued success after six months, Muffin decided on focused ultrasound at the same clinic in Switzerland.

“My tremor and the medication dosage increased over the years. It would help, but the shaking never disappeared,” says Muffin. “I thought that my brother was really brave to try the new approach. I wanted more reduction in my tremor but had not been as active as he was in seeking alternatives.”

“When I did speak with the doctor, he answered my questions at every step along the way,” says Muffin. “Thanks to the treatment, about 90% of my tremor is gone. I can do things again. Over the years I had taught myself to eat and do many other things with my left hand – even on medication. Now I am off all tremor medication and I can eat with my right hand again. I can even knit without any stitches falling off the needles!”

Muffin shares that her work as a psychotherapist was compromised because she could not read her own patient notes. She had to retype all of her notes on a computer – which was also difficult because of her tremor. Since the FUS treatment, she is able to write legibly and to easily use a computer.

They both advise patients to learn about focused ultrasound and assess whether it could be right for them. “I can’t imagine a safer or better way to attack the problem of tremor,” says Mark. They both had to pay for the travel to Switzerland and the treatment. “There is no question that this was a huge investment,” says Muffin. “But I feel it was an investment in the quality of my life. And it was worth it.”

Having experienced the benefits of focused ultrasound treatment, Mark and Muffin are donors to the Focused Ultrasound Foundation, supporting the organization’s mission to accelerate progress to expand access to patients as soon as possible.