Charlottesville, VA – September 29, 2015 — The first patient with depression has been treated with focused ultrasound. 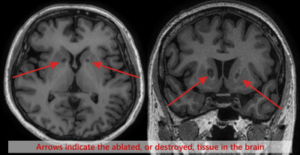 This procedure marks the beginning of a pilot clinical trial to determine the feasibility and safety of MR-guided focused ultrasound to non-invasively destroy a small volume of tissue deep in the brain – the anterior limb of the internal capsule – a well-established target for treating severe depression. In this initial patient, the target was successfully ablated without complications.

This study is being led by neurosurgeon Jin Woo Chang, MD, at Yonsei University College of Medicine in Seoul, Korea.

“There is a need for non-invasive treatment options for patients with depression that cannot be managed through medication,” says Dr. Chang, who is president of the Korean Neurosurgical Society. “We were able to conduct the focused ultrasound procedure without complications or serious adverse effects. We will continue to monitor the patient to assess how her depression symptoms change over time.”

In this trial, 10 patients with severe depression that is resistant to medication or electroconvulsive therapy will be treated with focused ultrasound using Insightec’s Exablate Neuro System. Outcomes will be measured with clinical examinations and MR imaging, as well psychological assessments during a six-month follow-up period.

“Modern clinical series from experienced centers have shown that ablative surgery can be very helpful in many patients with treatment refractory depression and obsessive-compulsive disorder. The ability to place small, well-controlled lesions using focused ultrasound without exposing the patient to the risks of open surgery and direct brain penetration is certainly an attractive new surgical option,” says Dr. Rees Cosgrove, head of epilepsy and functional neurosurgery at Brigham and Women’s Hospital.

If the results of this pilot study demonstrate that focused ultrasound is feasible and safe, it will lead to a pivotal trial in a larger number of patients to determine long-term safety and efficacy of focused ultrasound to alleviate severe depression.

This trial is supported by the Focused Ultrasound Foundation. “We are encouraged to see the research building on the utility of focused ultrasound as a non-invasive method to treat a range of both neurological and psychiatric disorders. This technology may offer new hope to patients suffering from depression, OCD, Parkinson’s, essential tremor, brain tumors and more,” says Foundation Chairman Neal Kassell, MD.

Additional information may be found on clinicaltrials.gov.

About Depression
Major depression is a psychiatric disorder in which a person consistently experiences feelings of sadness, guilt and worthlessness for at least two weeks. Depression can interfere with daily life, often leading to a loss of interest in activities, trouble sleeping and impaired concentration. According to the World Health Organization, depression represents one of the largest and most important sources of human morbidity and is a major source of lost productivity and health care costs.

About Focused Ultrasound’s Potential for Depression
Focused ultrasound is a potentially powerful non-invasive approach for treating patients with severe depression that is refractory to medical therapy. This non-radiation treatment may be a more convenient, comfortable and safe option for patients, that eliminates the risks of open neurosurgery. If shown to be safe and effective, focused ultrasound for depression may ultimately be a less expensive and widely accessible treatment option for a large number of patients.

About Current Treatments for Depression
Although the majority of depressed patients improve with drugs and psychotherapy, up to one-third are refractory to the best available current treatments. These patients are often eligible for neuromodulation strategies, such as electroconvulsive therapy (ECT), transcranial magnetic stimulation (TMS), and neurosurgical procedures, that directly target specific brain regions to disrupt the abnormal circuitry that generates the depression symptoms. Currently available approaches include lesional procedures such as radiofrequency (RF) or radiosurgical ablation, and non-lesional procedures, such as deep brain stimulation (DBS).

RF ablation involves inserting an electrode in the brain through a hole drilled in the skull and heating its tip to create a thermal lesion and destroy the target. One of the most frequently targeted brain regions is the anterior limb of the internal capsule, in a procedure known as capsulotomy. An alternative to RF lesioning is radiosurgical ablation, which destroys the target using ionizing radiation, but takes months to achieve the effect and has the associated risks of radiation exposure. Deep brain stimulation (DBS) involves the permanent insertion of two electrodes into a brain target and using electrical stimulation through a pacemaker implanted in the chest well to disrupt activity within that structure. DBS does not involve a lesion, is reversible and can be programmed to treat the patient’s symptoms and minimize side effects.

RF ablation and DBS both involve a brain operation and access to the brain. These are surgical procedures with the risks of infection, bleeding, and neural tissue damage from the electrode and implant. Although there is a large experience with RF lesions in psychiatry, DBS remains highly investigational. Radiosurgery is a non-invasive procedure, but is unpredictable in its effects on both the brain and clinical symptoms. Focused ultrasound now provides an alternative to these strategies, combining the advantages of a non-invasive approach with the accuracy and effectiveness of a directed surgical procedure.