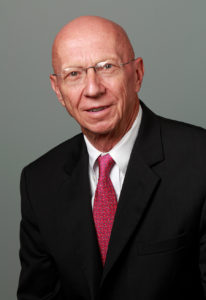 In fact, according to Kassell, “It was a conversation with Bill that provided the inspiration and motivation to create the Focused Ultrasound Foundation.” Crutchfield’s father, Gayle – a world-renowned neurosurgeon himself – was the founder of the University of Virginia’s Department of Neurosurgery in 1941, so Bill’s appreciation of the significance of focused ultrasound was not casual, nor did it happen by mere chance.

Asked why he supports focused ultrasound research, Crutchfield said, “In all honesty, it has nothing to do with my friendship with Neal. It’s really about the potential of this new technology to revolutionize treatment of so many conditions for so many people. Neal and his team are doing amazing things, and I fully support their efforts.”

Crutchfield has remained true to his Charlottesville roots over the years, keeping his headquarters local even while creating a company with a global impact. Crutchfield achieved this level of success by focusing on consumer needs and excellent service and by always staying at the technological forefront of the catalog and online retail marketplace. The Crutchfield Corporation changed the way people think about the industry and prompted competitors to step up their game.

In 2007, Bill Crutchfield was inducted into the Consumer Electronics Hall of Fame – the same year that Paul Allen (Microsoft) and Amar Bose (Bose) were inducted.

Kassell said, “The parallels between our organization and Crutchfield are worth noting. Bill recognized a market need. But, without the capacity to fill that void, this recognition wouldn’t have had an impact. Bill’s passion, drive, and vision made him a pioneer, and to this day, he is on the leading edge. Our leadership, staff, and supporters share the same kind of passion and vision that drove Bill, and we hope to attain the same level of success in our field.”