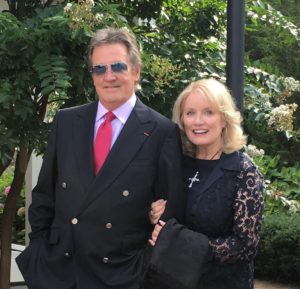 Rick is Chairman and CEO of Tupperware Brands, a multi-billion dollar global portfolio of direct selling companies. He was previously with Avon Products, where he held a number of senior management positions in Europe, Asia, and the US. Rick is a Steward of the World Economic Forum’s Gender, Education, and Work initiative, as well as a United Nations Women HeForShe IMPACT Champion and founding member of their Private Sector Leadership Advisory Council. He serves on the boards of the Boys & Girls Clubs of America, the Smithsonian Institution, the Global Peter Drucker Forum, and Rollins College.

Rick was honored to be recognized by France as a “Knight of the Legion of Honor,” by the People’s Republic of China with the Marco Polo Award, and named CEO of the Year by the Holmes Group. Rick was educated at Guilford College and is the recipient of a number of honorary doctorates. He served in the US Navy on the destroyer USS Power.

Susan began her trailblazing career in television as the first female account executive for the ABC affiliate in Orlando, Florida. Upon graduation from Rollins College, she became the first female account executive at the ABC station in Los Angeles. She was also the first person to transition from the business side of broadcasting to on-air talent. As a newscaster and on-air personality, Susan has interviewed major political dignitaries, newsmakers, and celebrity legends. Today, she interviews women for ChainOfConfidence.com and for other nonprofit organizations.

Susan was elected to the city council and served as Mayor Pro-Tem, of Hidden Hills, CA. She serves on the board of Rollins College’s Hamilton Holt School and their President’s Leadership Council.

They have their own foundation, the Rick and Susan Goings Foundation, located in Florida and are long-term supporters of Boys & Girls Clubs throughout the United States and internationally. They also advocate on behalf of women and children.

We recently sat down with Rick and Susan and asked them about their involvement with the Focused Ultrasound Foundation.

What is your connection to the Focused Ultrasound Foundation, and how did you first hear about the Foundation?
During one of our early visits to Israel with representatives of the State Department, we were exposed to many incredible innovations in research and development. It was immediately clear to us that a culture of innovation was pervasive across a broad range of sectors beyond defense but also in cybersecurity, engineering, advanced manufacturing, and healthcare.

Several years later, we were introduced by a very dear friend, Dr. Karen Rheuban, to her renowned neurosurgical colleague, Dr. Neal Kassell. Dr. Kassell thought we might be interested in learning more about a new, transformational non-invasive healthcare technology developed in Israel: focused ultrasound. Since that first meeting, Dr. Kassell has become a good friend and we have become financial supporters.

What moved you to get involved?
During our initial discussions, we were surprised to learn about the many challenges faced by innovators in bringing new healthcare technologies through the regulatory process, to market and ultimately, as appropriate, to broad adoption for the benefit of patients. We were encouraged to learn about the Focused Ultrasound Foundation and their work.

What excites you most about the Foundation?
Rick: Change, particularly in medicine, is difficult. I recently spoke to a group about the importance of case studies. Despite incredible advances in diagnostic capabilities, including the use of sophisticated imaging and genomic capabilities, there still remain serious gaps in our diagnostic and treatment capabilities and success rates for certain illnesses. As such, I celebrate the evaluation and advancement of new technology in medicine.

Why do you care about focused ultrasound?
Rick: What really moved Susan and me to get involved was that the technology and the knowledge was potentially applicable in so many different areas. We also understood that such breakthroughs often meet with resistance either from those treating maladies in more traditional ways or because of the financial considerations it might impact.

What do you tell others about the Foundation?
Susan: I am truly amazed at the incredible potential focused ultrasound brings to the future of medicine. Conditions that once seemed incurable are now being viewed through the lens of focused ultrasound. Rick and I are honored to be supporters of this groundbreaking technology and the Foundation.

“Rick and Susan are treasured friends of the Foundation,” said founder and chairman Neal F. Kassell, MD. “Rick’s global outlook informs how he does business, as well as his approach to philanthropy.”