Peter Gabriel is a musician. He founded the group Genesis with a bunch of friends from school. Since leaving the band in 1975, he has pursued a solo career releasing albums and film scores. In 1980, he founded WOMAD (World of Music Arts and Dance), which has presented 170 festivals in over 30 countries. In 1992, he founded Witness.org, pioneering the use of cameras and technology in human rights work. He also founded theElders.org with Nelson Mandela and Richard Branson in 2001, to bring together a respected group of world leaders, whose influence stems not from political, economic or military power, but from experience, integrity and wisdom. His other work interests have been in innovative technology, especially in digital media, audio, music, visual language and more recently healthcare. 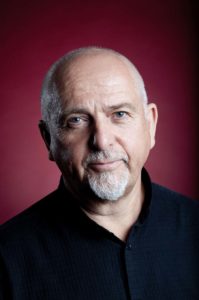 What is your connection to the Focused Ultrasound Foundation? How did you first hear about us?
I was introduced to the Focused Ultrasound Foundation by a friend of ours, Mary Lou Jepsen, who felt focused ultrasound was a very exciting area of research, and whose recent developments could fundamentally change and facilitate many new areas of treatment. Diseases like glioblastoma and pancreatic cancer rely on precision that has previously been unavailable.

What moved you to get involved?
I have seen some of the evidence of what can be achieved through focused ultrasound. I also love the ingenious invention of microbubbles as a very precise drug delivery mechanism.

What excites you most about the Foundation?
My wife, Meabh, and I are convinced that new treatments using sound, light, and magnetic and electrical fields are going to transform healthcare. As soon as things can be digitized, they have the chance to be made accessible and affordable. All these approaches can provide a whole new palette of treatments that are more precise and benign than those currently available through drugs and surgery alone.

Why do you care about focused ultrasound?
Since my wife had a nasty non-Hodgkin’s lymphoma and was lucky enough to come through it as a result of taking part in a trial for CAR T-cell treatment, we thought long and hard about access to high-tech treatment. Although currently focused ultrasound requires costly equipment and very controlled and precise environments, it has the long-term potential to be digitized, miniaturized, and augmented with artificial intelligence, and therefore made affordable and accessible around the world. We really hope to be able to work with Neal Kassell and the Foundation going forward on areas that might be helpful to both a digital treatment platform and the Foundation’s pioneering work with focused ultrasound.

What impact do you hope to achieve through your philanthropy?
Meabh and I are really hoping to help encourage the adoption of such a digital platform that we and our partners William and Vince Li call The Tap.

What do you tell others about focused ultrasound and the Foundation?
We are both excited about the transformative reach this new technology could have.

What would you tell someone who is considering making a gift to the Foundation?
Double it.