S. Morry Blumenfeld, PhD, is an authority on medical device development, specifically in the areas of imaging and minimally invasive procedures. He spent nearly 35 years holding various positions at General Electric (GE), where he was integral in developing the company’s computed tomography (CT) and magnetic resonance imaging (MRI) product lines. Dr. Blumenfeld is currently President and CEO of Quescon Consultants, a medical device consulting company, and a Partner in the MedTech Investments for OurCrowd. 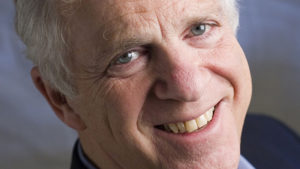 What is your connection to the Foundation? How did you first hear about us?
I have been fortunate to meet wonderful people during my career, including Dr. Neal Kassell. When I met Neal in the early 2000s, he was interested in the Gamma Knife, but he soon realized the exponential potential of focused ultrasound. When Neal started the Foundation, I was extremely impressed with his work to advance focused ultrasound. I served on the Foundation’s Board of Directors from 2006 to 2014.

What moved you to get involved?
I wanted to ensure that focused ultrasound got the support it needed.

What do you tell others about the Foundation?
I tell people that focused ultrasound can truly change lives. I get letters all the time from folks that have essential tremor or Parkinson’s disease. For example, a woman who wrote me from Wisconsin had essential tremor and was truly suffering. She received focused ultrasound treatment, and the change was miraculous. To watch the transformation is unbelievable and brings tears to my eyes. It is emotional and touching to see how this treatment positively changes people’s lives.

What would you tell someone who is considering making a gift to the Foundation?
There is no better foundation. The Foundation is having an enormous impact in advancing focused ultrasound technology and making it available to help people in the shortest amount of time. If an organization like the Foundation had existed in the early MR days, it likely would have taken years off the time it took for the technology to become widely available.

The Foundation has been critical to advancing the field of focused ultrasound to where it is today. In fact, without the Foundation the field might have died.

Can you give us some brief biographical information?
I received my undergraduate degree and PhD in physics from the University of Toronto. I spent 35 years at GE, helping to run advanced development and launching their CT scan and MRI businesses. I became fascinated and passionate about discovering new ways of medical imaging.

In 1990, while working for GE Medical Systems, I became intrigued with the idea of using imaging, and specifically MRI, to provide the four important capabilities – planning, guidance, monitoring, and control – to assist surgery in the transition to minimally invasive procedures. Instant visual control is important to make sure that any surgical procedure is carried out appropriately; no one would want a surgeon who could not see what they were doing. This led to the conception of the “Double Donut” or Signa MRT, an open MRI system that would enable minimally invasive surgery using MR guidance.

In 1991, a close colleague and collaborator, Professor Ferenc Jolesz, and I started the MR-guided Focused Ultrasound project. In all, we built five units that were used to ablate (or destroy) benign breast disease at Brigham & Women’s Hospital, Mayo Clinic, Stanford University, MD Anderson Cancer Center, and Hôpital Saint-Luc in Montreal, Quebec. The initial experiments were quite successful, but in 1996, GE decided to abandon therapeutics and instead focus on imaging. Fortunately we were able to transfer our technology to an Israeli company called Insightec. At the same time, while serving as the Director of GE Medical in Israel, I was able to watch the incredible development and growth of companies like Insightec in the field of focused ultrasound.

As you can see, I have been passionate about the development of medical imaging and imaging devices, and I am proud to be part of the technology’s evolution.

What impact do you hope to achieve through your philanthropy?
The key is to help save people. It makes me feel good to be a part of helping save people’s lives.