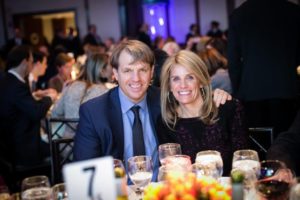 Katie Garrett Boehly graduated from The College of William & Mary with a BA in History in 1995. She came to the College as a fourth-generation student with significant family ties to the School.  After graduating, she joined Automatic Data Processing, Inc. (ADP) as an associate covering the greater Richmond area, where she was a nationwide top sales associate. After several years at ADP, she moved to New York City to lead the Court Express sales team nationwide and married Todd Boehly in September 1998. In 2001, she transitioned to become a full-time mother. The couple have three sons. Katie is active with The Boehly Center for Excellence in Finance, Brunswick School in Greenwich, CT, and has served on the board of FACES (Finding A Cure for Epilepsy and Seizures) since 2017.

Todd Boehly is Co-Founder, Chairman, and Chief Executive Officer of Eldridge, a holding company that has invested in more than 70 businesses across diversified industries. Todd is an owner of the Los Angeles Dodgers, the Los Angeles Sparks, Cloud9, and DraftKings. He is Chairman of Security Benefit, and MRC, (formerly Media Rights Capital), which owns dick clark productions, and has investments in A24, Fulwell 73, and Penske Media, which owns Billboard, Rolling Stone, Variety, and The Hollywood Reporter. Todd is also on the boards of Cain International, Kennedy Wilson (NYSE:KW), PayActiv, Truebill, CAIS, Horizon Acquisition Corporation I (NYSE:HZAC), and Horizon Acquisition Corporation II (NYSE:HZON). Prior to founding Eldridge, Todd was President of Guggenheim Partners and founded the credit business at Guggenheim.

How did you first hear about the Foundation?
The journey began with our eldest son, Nick. Nick has epilepsy, and a few years ago we started studying surgeries. When we were exploring options for him, Mike Milken told us we should connect with Neal Kassell given his background, experience, and perspective. Neal was a great sounding board as we developed our plan to address Nick’s epilepsy.

As a result of our discussion with Neal, we learned about the incredible work the Focused Ultrasound Foundation is undertaking. Meeting Neal started what ultimately became the collaboration of Nick’s brain surgery, our interest in learning about and understanding the brain, and getting involved with the Foundation.

What excites you most about the Foundation?
When speaking with Howard, he commented that instead of non-targeted chemotherapy, focused ultrasound has found a way to target unhealthy tissue in a really productive way. That idea got us pretty excited because the technology has the ability to treat people noninvasively.

What impact do you hope to have?
Having gone through this experience with our son Nick, we understand firsthand the importance of funding and researching alternative therapies. If the Foundation can continue to make focused ultrasound more widespread and accessible, it can improve the lives of both patients and their families.