Dr. Jimmy Wright grew up in Atlanta, Georgia, where he attended The Westminster Schools. He received his undergraduate degree from the University of North Carolina (UNC), where he was a Morehead Scholar. He then earned his PhD in Education from UNC while serving as Assistant Director for The John Motley Morehead Foundation. He has led the Jefferson Scholars Foundation for the past 35 years. He and his wife Elizabeth (Liz) Wood Wright celebrated their 45th anniversary in January. They have one living son and three grandchildren who live in Charlottesville. 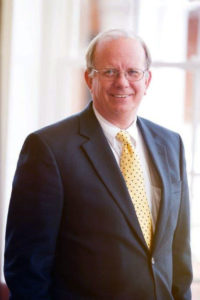 What is your connection to the Foundation? How did you first hear about us?

I first learned of the Foundation when I met Neal Kassell at a cocktail party. Sensing that Neal was the talented and special person he is and that we shared some of the same ideas about organizational leadership, I readily accepted an invitation to attend a Foundation event. The Jefferson Scholars Foundation then asked Neal to make a presentation to the Jefferson Scholars and Fellows, which he most impressively did.

What moved you to get involved?

What I learned about the work of the Foundation at the event and from Neal’s presentation was both intriguing and fascinating, and what I have come to know about Neal’s passion and commitment led me to want to be of whatever help I could, both to the Foundation and to him. Neal’s sense of urgency is contagious.

What excites you most about focused ultrasound?

What excites me the most and should excite everyone is the vast potential for good that this technology possesses. The technology can be life transformative, and we all need to do whatever we can to help speed the incredible progress being made.

Why are you so passionate about focused ultrasound?

Liz and I have friends and family who could have benefited from this technology. We have friends today who we believe could benefit if the protocol could be adopted.

What impact to you hope to achieve through your philanthropy?

I hope that my advocacy of, and admiration for, the work of the Foundation and Neal will encourage others to join the effort.

What do you tell others about focused ultrasound?

I emphasize the potential benefit and need to increase the pace of progress.

What would you tell someone who is considering making a gift to the Foundation?

At the Jefferson Scholars Foundation, we have always believed that every gift, no matter the amount, is important and that every donor is important. The Foundation has a similar philosophy. I would tell anyone considering making a gift that the gift will be impactful, that it will be appreciated, and that they, as donors, will be appreciated. They can trust the leadership and management of the Foundation to maximize the impact of their gift and to change the lives of others.