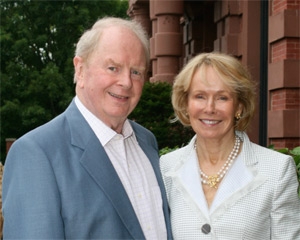 Fredericka is chair emeritus and cofounder of Summer Search Boston – an organization whose mission is to identify low-income high school youth who demonstrate resiliency in overcoming hardship and the desire to help others.

Howard has served in various leadership positions at Harvard during the last 47 years. He is the Sarofim-Rock Baker Foundation Professor Emeritus, former Associate Dean at Harvard Business School, and former Vice Provost of Harvard University. Howard also served as the Director of Publishing and chair of the board for Harvard Business Publishing Company.

Howard has been involved with a number of public and privately held companies, including the Baupost Group, Inc.; Camp, Dresser & McKee Inc.; Preco Corporation; and Simmons Associates. He has authored, edited, or co-authored 14 books and 42 articles. He has served in leadership positions on several nonprofit boards including the Boston Ballet, Sudbury Valley Trustees, National Public Radio, Mount Auburn Hospital, the Nature Conservancy, Upstream USA, and the Isabella Stewart Gardner Museum. He is a graduate of Stanford University and Harvard University.

How did you first hear about the Foundation?
Howard: Jane and Dorothy Batten are good friends of ours – I served on the board of Landmark Communications starting in 1992.

Fredericka: Focused ultrasound is a life changing treatment with minimal collateral damage. It can be used for a variety of medical disorders – some common, some uncommon. The number of medical issues focused ultrasound can affect is staggering – from opening the blood-brain barrier to other parts of the body, the list seems to be constantly growing.

What excites you most about the Foundation?
Howard: For me, it’s spreading a new best practice, which is often hard in medicine, and doing it for a treatment that has very little collateral damage. The success that the Focused Ultrasound Foundation has had in getting scientists to experiment with new ways of treating disease is very exciting. These successes are not to garner profits, but to spread this new idea to anybody who can use it to better treat patients.

Fredericka: The fact that the Foundation is a nonprofit with a worldwide impact is pretty extraordinary. It’s sharing and distributing knowledge, information, and expertise for the sake of mankind.

Howard: We are both involved in trying to do things that are nontraditional – whether it’s education, biologically inspired engineering for disease, or Upstream USA, which is attempting to change healthcare so that all women receive the highest quality services and have convenient access to the full range of contraceptive methods.

What impact to you hope to achieve through your philanthropy?
Fredericka: To make the world a better place for our children and grandchildren.

Howard: To foster innovation, whether it’s in education, science, or business.

Fredericka: When we speak about focused ultrasound, people often ask where to find treatment sites. We live in Boston, so we are thrilled to let people know that Brigham and Women’s has a focused ultrasound program and is a leader in the field.

Howard: The Foundation is very helpful in connecting people with these centers and doctors and being a resource for those who want to learn more about how focused ultrasound can help them or their loved ones.

What would you tell someone who is considering making a gift to The Foundation?
Howard: Since we have been involved with the Foundation, we have been amazed at the how successful the organization has been in spreading the word about focused ultrasound. Those who are involved with the Foundation not only contribute financially, but they share their particular expertise and ideas to help further the cause.
Over half of the Foundation’s budget is used to fund research and, it is clear to us that our donations are leveraged to generate other research dollars. The Foundation uses its donor’s funds very wisely and carefully and as a result, every dollar is critically important to helping the Foundation advance the field of focused ultrasound.

Fredericka: I agree with Howard that the Foundation’s ability to leverage funds and increase awareness are critical functions that help the technology advance more quickly. I sometimes feel frustrated that the general public is unaware of the technology, its enormous potential, and how it can be accessed. The Foundation works to help address these issues.
Neal’s role in the world of focused ultrasound has been extraordinary. It is not often that someone of his standing dedicates over a decade of his life to something that will benefit so many people. I feel that it’s important that people to be aware of the sacrifices Neal has made in order for all of this to be accomplished.

Howard: When we evaluate our philanthropic investments, it all about the people. And Neal is one of the great ones we’ve met. You are betting on people in your philanthropy – it’s not necessarily the institution. We feel that Neal and his team are a very good bet.