Carol Loomis has spent her career reporting on complex financial and business subjects for Fortune Magazine. In 2014, she retired as a senior editor-at-large after a 60-year career with the publication. After playing a role in the first mention of focused ultrasound in Fortune, she became a supporter of the technology’s potential. Learn how a personal memory and an interest in helping people led her to support the Foundation. 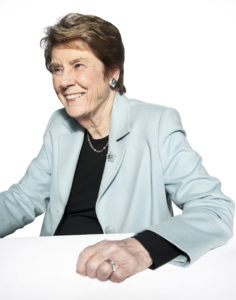 Can you give us some brief biographical information?
I was born in 1929, just in time for the Depression and World War II, and grew up an only child in a very small Missouri farming town named Cole Camp. My father produced gravel for road-builders, and my mother was a teacher. Ultimately, in 1947, I made my way out of Cole Camp’s good, though small, high school, graduating in a class of 36 students.

Entering college, I spent two years at my mother’s alma mater, Drury College in Springfield, Missouri. But I wanted to be a journalist. So I transferred as a junior to the University of Missouri’s Journalism School, which at least a few people besides me would call the best in the nation.

Preparing to graduate in 1951, I had my sights set on seeking a career in New York City, but my parents thought that too big a leap. Instead I applied for a job as an assistant to a publication manager at the Maytag Co., in Newton, Iowa. I was chosen as one of three finalists, and we were all flown in Fred Maytag’s plane to be interviewed in Newton. The flight was a huge thrill, none of us ever before having been in a private plane. My next thrill was that I got the job. I actually think I had an advantage over the other candidates—both city girls—because the Maytagers interviewing me probably thought I’d be content in a small town like Newton (14,000 population), having grown up in Cole Camp (1000). I stayed happily at Maytag for two-and-a-half years, but never gave up my wish to be working in New York City.

In 1953, with that good Maytag experience behind me, I wangled interviews with Time, Life, and Fortune and was hired by Fortune to be a “researcher,” which was the magazine’s standard journalistic job for a woman. Researchers worked with writers (all but one of them male) to help report and produce the long-form stories that were Fortune’s standard fare.

After eight years, I was flabbergasted to be promoted to writer, an upward step very unusual for a woman. I hung around at Fortune for a long time after that, staying 60 years altogether and setting a longevity record not only for Fortune but also for Time Inc., Fortune’s parent.

My promotion to writing coincided with the magazine starting a new investment column, to which I was assigned. That was a good fit for me because I had grown to like investing. Even so, I had a lot to learn about writing and, as it turned out, about investing, too.

I remember that one of my early assignments was writing an article about gold, and for that job I interviewed Franz Pick, a well-known gold expert. Among the few things I knew about gold was that Americans weren’t allowed to buy the mineral. But then Pick told me that Americans did buy gold! I said, “But isn’t that illegal?” And he looked at me with pity and said, “What are you? A mental virgin?”

As I grew acquainted with the financial complexities of the huge companies that Fortune wrote about, I acquired a real interest in accounting and the mathematics of business. That made me willing to take on complicated financial subjects that many other Fortune writers didn’t care for. In time, my interest in some of those tough topics helped me to build a reputation in the financial journalism field.

The 1970s were a decade in which women made great strides in business—and I was there, figuratively, to say hello, having benefitted from a timetable just slightly advanced. As a woman, I never felt that I was handicapped in the world of financial writing. I always believed that if a writer walked into an interview having done his or her homework, the interviewee stopped caring whether you were a woman or a man and began focusing on answering the questions. The result was what you’d come for: a good interview.

How did you first hear about the Foundation?
I am a close friend of Wyndham Robertson, who is on the Foundation’s Council. Wyndham called to tell me about focused ultrasound and the Foundation’s important work, saying that she thought the topics could be a good story for Fortune. I promptly turned this idea over to a more logical writer, Ryan Bradley, who as the son of a doctor had a built-in fondness for medical subjects. The piece Ryan wrote—Five ways focused ultrasound is changing medicine—primarily explained the technology, but the mention of the Foundation was the organization’s first in a major publication.

A few months later, Neal came to New York, and we had lunch. I was very interested to learn more about the Foundation and its impressive work, particularly because I had a built-in reason for listening hard: My late mother had essential tremor, and it affected her life greatly, especially as she aged. True, her essential tremor was helped somewhat by medication, but I can only imagine the impact a technology like focused ultrasound could have had on her life.

What motivated you to get involved?
My husband and I (with my husband leading the way) met Warren Buffett when he wasn’t yet famous and we were all relatively young. The Loomis family invested soon after in Berkshire Hathaway, and in a few years I became the pro bono editor of Warren’s annual letter to Berkshire’s shareholders, a job I still have. Our Berkshire investment eventually gave us the wherewithal to start a small family foundation, which we did in 2010. Supporting medical causes is not our foundation’s normal focus, but the more I learned about the Focused Ultrasound Foundation, the more interested I became. I thought of my mother and of the possibilities that could have been offered her had she learned about focused ultrasound and been treated. The next step was easy—a decision to have some of our philanthropic funds go to a cause that could have helped her.

In my own life, I am also frequently surprised to see people who could be helped by focused ultrasound and don’t yet know it. Not long ago, for example, I ran into an old friend at a bridge tournament and noticed immediately that she was suffering from essential tremor. I drew her aside later to tell her about focused ultrasound and the Foundation and referred her to the website where she can learn more. That one incident sharpened my understanding of what a gap the technology may come to fill.

Why do you care about focused ultrasound?
Focused ultrasound is in its early stages, and, for journalists particularly, it is always important to learn about developments that are in their infancy. The technology has enormous potential, and when we think about where it could be in 10, 20, or 30 years, the possibilities seem limitless. Yet so many people are completely unaware of focused ultrasound and its great promise. I’m glad to seize every chance I have to spread the word.

Contributing to the Focused Ultrasound Foundation makes undeniable sense for my family. I feel lucky that we have found an organization that is doing such great work and that we have a chance to help.

What do you hope to achieve through your philanthropy?
My family appreciates the importance of giving back when we have the resources to do so. We recognize also that the Focused Ultrasound Foundation is an important player in the future of medicine. I feel good about making a contribution to a highly deserving organization that uses its donors’ money wisely.

What do you tell others about the Foundation?
I tell them that there is a technology they probably have never heard of, but that has prospects of helping many millions of people. I encourage everyone to go to the website because of what they can learn there.

What would you tell someone who is considering making a gift to the Foundation?
I would tell them that their money will be used in intelligent ways and that their gift will enable the Foundation to continue making great strides in ensuring that the technology is known throughout the world. I would also emphasize that they are getting in on the ground floor of something that is very important and that could change the future of medicine.