You’ve been a significant leader in treatments for Parkinson’s, Alzheimer’s, and brain injuries. What is your vision for this next phase of research at the Rockefeller Neuroscience Institute?
Our main focus is helping to tackle some of the big public health issues facing us – opioid addiction problems, as well as dementia and Alzheimer’s. We have been building a large infrastructure here

and recruiting key leaders from across the world to facilitate advances in research involving treatment of neurological conditions and also overall improvement of brain health.

We are trying to minimize or prevent some of these conditions over time by improving the day-to-day functioning of the brain. The idea is to encourage patients to practice brain health in the same way you practice heart health.

Tell us the story of the 61-year-old nurse, Judi, whom you treated in October with focused ultrasound.
She’s really a very special person and a pioneer in the treatment of Alzheimer’s. She is brave and sees the potential benefits for herself – and moreover for future patients – in volunteering to be the first patient in the world to undergo focused ultrasound treatment on her hippocampus.

Judi was a nursing leader and educator in the neonatal intensive care unit (NICU) here at West Virginia University with a PhD in nursing. But she had to stop working because of the memory problems she had from early Alzheimer’s.

She still went to the NICU to cuddle newborn babies, including those who become addicted to drugs in the womb due to their mothers’ drug use – because that has a healing effect on the babies’ development. She is a caring person who tries to help everyone, and this was a way to help even though she is not able to practice nursing anymore.

How did you meet?
She was a patient of Dr. Marc Haut, the chair of the Department of Behavioral Medicine and Psychiatry at WVU and a study team leader, who has been managing her early Alzheimer’s; our comprehensive multidisciplinary team subsequently determined that Judi would be a good candidate for the study.

How did the procedure work?
The patient was placed in an MRI machine. A helmet was secured over her head with more than 1,000 ultrasound elements that precisely deliver ultrasound waves to the hippocampus, which is the part of the brain involved in memory formation and cognition. This is the area that is devastated in those with Alzheimer’s disease.

The hippocampus of her brain was filled with beta amyloid plaques. These are protein tangles that form in patients with Alzheimer’s and dementia, and they slow down communication between the nerve cells.

So our goal was to target the hippocampus and the memory part of the brain and to open up the blood-brain barrier to facilitate the clearing of the plaques and to reduce the cognitive decline in Alzheimer’s disease.

What is the blood-brain barrier, and why is it so important?
The blood-brain barrier (BBB) is like a shield that protects the brain and prevents the blood and the brain from interacting with each other except for very small molecules – such as glucose and oxygen – but it prevents larger molecules like medications, antibodies, and immune system cells. It’s a protective barrier that prevents germs, bacteria, and other organisms from crossing the bloodstream into the brain, but it also prevents medications and other treatment approaches from reaching their targets.

So, with focused ultrasound, we are able to open the BBB temporarily. Previous studies in animal models of Alzheimer’s disease have shown that opening up the barrier reduces plaques in the local areas and also reduces cognitive and memory decline. 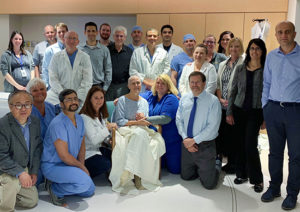 What happened during Judi’s treatment?
We administered three different treatment sessions of focused ultrasound to the hippocampus, each two weeks apart. We have to wait to see how she does clinically with her memory and cognition, and also to see how the Alzheimer’s plaques are impacted over time. Our goal of safely and reversibly opening up the BBB was achieved.

How long does the procedure take?
Between three and four hours each time. There were a lot of details that we had to look at. I suspect over time it will get faster, but at this point we are learning a lot about how to use the system for helping Alzheimer’s patients.

When do you think you’ll have some sense of the results?
We are monitoring and evaluating Judi and assessing her for memory and cognitive function. She’s also being assessed with imaging to evaluate changes in Alzheimer’s plaques. It’s too early, but hopefully over the next year or so we will have some additional outcomes to share with her and her family as part of the trial.

The outcome at this point is that we were able to safely and reproducibly open the BBB for Judi during three treatment sessions.

Does she report feeling any different?
She’s very positive about the trials, and she knows it’s too early to determine the outcomes. But so far we’re cautiously optimistic.

Do you have a second patient on the horizon?
Yes, we performed two focused ultrasound treatments in January 2019 on a second patient, a 71-year-old female with early Alzheimer’s. Additional patients are scheduled and this trial will also involve additional centers – we were the first, but others will come on in 2019 as well.
[As of publication date, the Ohio State University Wexner Medical Center and Weill Cornell Medicine are active in this trial.]

What is your vision for what focused ultrasound will eventually be able to do for humanity?
It’s a unique technology that has been proven with clinical trials to be safe and effective for the treatment of essential tremor. Now we need to study its benefits for epilepsy, Parkinson’s disease, tumors, and Alzheimer’s.

I’m optimistic about the technology becoming more widespread and utilized in the coming years for various indications.

I’m excited about that because one of the missions of the Rockefeller Institute is to tackle some of these big public health issues. And right now opioid addiction is front and center. We see many people who are dying from overdoses and West Virginia has more deaths from opioid overdoses than any other state in the country.

Alzheimer’s is also a big problem, with the numbers growing and no cure – despite billions of dollars and hundreds of clinical trials. There are no effective treatments.

These are two big public health challenges facing our society worldwide that we hope that focused ultrasound will have a role in helping.

Ali Rezai, MD, is the Executive Chair and Director of the Rockefeller Neuroscience Institute at West Virginia University and the John D. Rockefeller IV tenured professor in neuroscience at the WVU School of Medicine.